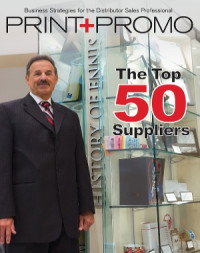 It’s no secret that print does best in a mature economic recovery phase of the business cycle. Considering we have been in this phase for nine years when the average recovery tops out at seven, numbers should be skyrocketing. Throw in President Trump’s Tax Reform and Jobs Act of 2017, and the industry just can’t lose, right?

Well, not quite. Although the economy is a significant influencer, historically, some printers always outperform others. High profits are achieved through strategic and operational excellence. No two companies’ stories will be alike, but true print leaders share common characteristics. These individuals understand that the print industry is one of opportunity. They seek to grow revenue—whether by adding ancillary services, or by moving to growth markets. In other words, they inspire the trends. With that being said, Print+Promo is proud to present its 2018 Top 50 Suppliers.

Of the 45 suppliers returning from last year’s Top 50:

Those who have been following our lists will recognize similarities between the 2017 and 2018 top three. Keith S. Walters-led Ennis Inc. took the No. 1 spot, earning $370.2 million, a 3.7 increase over 2017 figures. The Midlothian, Texas-based trade printer made two key acquisitions this year (Wright Business Graphics and Allen-Bailey Tag & Label); however, these firms are not a part of the reported total. Also not included is Curtis Business Forms.

The 2018 list did feature five new additions, with one even placing in the top 10. In spite of parent company Cenveo’s financial situation, Discount Labels ranked at No. 9 with $74.0 million in sales. Label Works (No. 23), Stylecraft Printing Inc. (No. 48), Apex Color (No. 49) and CFC Print Solutions (No. 50) were the additional newcomers.

In the meantime, here are a few other fun stats we saw in our analysis: