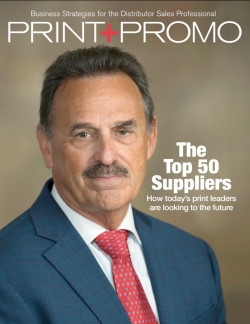 It’s been an interesting year for our country, with information changing as quickly as a tweet disappears from a timeline. American businesses have been monitoring heightened trade tensions and recession risk. For printers, that list extends to paper supply shortages, raw material inflation and a lack of skilled personnel—the latter of which garnered more bad press when the U.S. Department of Labor’s Bureau of Labor Statistics stopped tracking jobs related to commercial print, screen printing and support activities for printing.

It’s true that there is no better predictor of 2019 trends than the direction of the overall economy, but even when business and manufacturing optimism are lacking, opportunities remain for clever, creative and persistent entrepreneurs and managers. That being said, Print+Promo has some good news of our own to share as we present our 2019 Top 50 Suppliers: Overall revenue for Top 50 submissions was $2.45 billion, a 5.1 percent increase over 2018’s $2.33 billion.

Of the 43 suppliers returning from last year’s Top 50:

Those who have been following our lists will find similarities among our top five, though there is one exception. It was a close call, but Western States Envelope & Label Co. knocked TST IMPRESO out of fifth place by nearly $67,000. Keith S. Walters-led Ennis Inc. held onto the No. 1 spot, earning $400.8 million—up by 8.3 percent thanks to the purchases of Allen-Bailey Tag & Label in May 2018 and Wright Business Graphics in August 2018. The Midlothian, Texas-based champion welcomed three companies to its roster when it acquired family-owned suppliers Flesh Co, Integrated Print & Graphics and Ace Forms. However, their individual revenues were not a part of Ennis Inc.’s final tally.