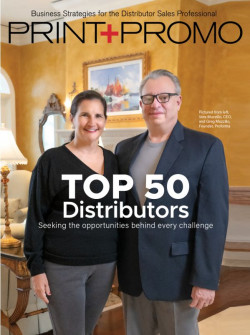 At the time of this writing, Americans were waiting for election results. They were also waiting for a safe and effective COVID vaccine, with two possible contenders having released promising findings since then. Both will influence the course of our economy, which will in turn determine whether some distributors close new deals or close their doors.

For many distributors of print and promotional products, the coronavirus pandemic has been a mixed bag of challenges and opportunities. There have been lost accounts and payroll challenges. But, there has also been time to rethink strategies and expand product offerings—personal protective equipment, anyone? The fiscal numbers presented in Print+Promo’s Top 50 Distributors resource were primarily achieved before the pandemic upended the world as we know it. And it should be known that our outreach for the 2020 list began roughly 6.5 months into COVID. That being said, the data tells an interesting story, so let’s break down the facts.

Those who have been tracking our lists will recognize striking changes within our top five—most notably, the absence of the previously $1.1 billion, top-ranked InnerWorkings, who, in July, signed a definitive agreement to combine operations with HH Global Group Limited.

“Over the past several months, we’ve been taking actions to put InnerWorkings in the best position to weather the challenging environment in which we’re operating,” Rich Stoddart, CEO of InnerWorkings said in a statement. “In these times of significant economic uncertainty, the board of directors and management determined to undertake a comprehensive process to preserve and enhance value for shareholders. After exploring a range of financing and strategic alternatives, and implementing meaningful cost-saving measures in response to the COVID-19 pandemic, we’re confident this combination represents the best path forward for our shareholders and InnerWorkings.”

InnerWorkings chose not to submit financial information for this year’s Top 50, which paved the way for Proforma, led by the husband-and-wife team of founder Greg Muzzillo and CEO Vera Muzzillo, to take the No. 1 spot. Promotional products distributor DiscountMugs.com, who placed fourth in 2019, also opted out this year. American Solutions for Business moved up to second place, and iPROMOTEu jumped two spots to round out the top three. Not to be outdone by Smart Source LLC, WebbMason Marketing, who tied with the Thomas D’Agostino Jr.-run company in 2019, enjoyed a 2.4% increase in revenue—enough to assume the No. 4 spot. Smart Source LLC completed the top five.

American Solutions for Business Raises Over $25,000 for Local Families in Need