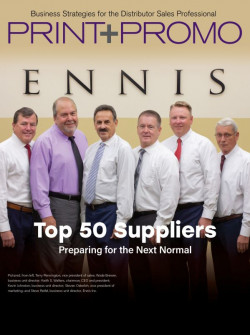 Just seven months ago, when Print+Promo released its annual State of the Industry Report, the conversation was different in its tone. Sure, there were whispers of a recession—will it or won’t it happen? But, the overall outlook was positive. Andrew D. Paparozzi, chief economist for PRINTING United Alliance (then SGIA), Fairfax, Va., didn’t see a clear risk of recession in 2020.

“Rather, recessions are caused by three factors: excesses, such as the real estate bubble prior to the Great Recession of 2008-09, or the dot-com bubble prior to the recession of 2001; policy errors, such as excessively tight monetary policy, poorly designed, timed and executed tax increases and innovation stifling-regulation; and exogenous shocks, such as the OPEC oil embargoes of the 1970s,” he told Print+Promo in February.

Even better, by Paparozzi’s estimates, total commercial printing industry sales (all sources, not just printing) for 2019 increased 1.7% to $87.3 billion, finishing in line with the association’s expectations, albeit at the lower half of the 1.5% to 2.5% range it had forecasted at the start of 2020.

Then, the coronavirus pandemic hit. Stay-at-home orders were issued, nonessential businesses abruptly shut down and positive cases skyrocketed. Who could’ve predicted this? And on top of it all, the country was dealing with what has shaped up to be one of the most contentious presidential elections in history.

Print+Promo had to make a choice: proceed with our 2020 Top 50 Suppliers list and hope people wanted to celebrate successes, or fill our pages with alternative content. As you can see, we made our decision, and we feel it was the right one. So, let’s break down the facts.

Those who have been following our lists will find similarities among our top five, though there is one exception. Not to be outdone for a second consecutive year, TST IMPRESO Inc. knocked Western States Envelope and Label Co. out of fifth place by nearly $12 million. Keith S. Walters-led Ennis Inc. held onto the No. 1 spot, earning $438.4 million—up by 9.4%, thanks to the 2019 purchases of Flesh Co and Integrated Print & Graphics.