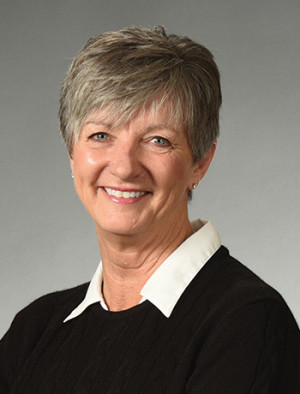 Lynn Brewton is approaching her 50-year anniversary in print, but it wasn’t all golden. Back then, the narrative tone of female representation was uncannily similar to an episode of Mad Men—something that Brewton hoped to redefine. She succeeded, according to her nominator, who said, “[Lynn’s] tenacity in a time when women were not included in careers, like print sales and management, contributed to opening doors for an entire generation of young women in this industry.”

The chief procurement/compliance officer of top 50 distributor WebbMason Marketing never set out to be an industry trailblazer, nor was she born into it. Brewton’s print roots can be traced back to the rectory of her parish church, where the high schooler and her family were active members. It was her mother who volunteered Brewton to learn how to run a newly donated multigraph machine.

“It was quite the process to get the artwork to a usable metal plate,” she recalled. “Most of the jobs necessary to do this no longer exist.”

That is where the relationship seemingly ended. Brewton left to finish school and start a family. When money got tight, she found work at a medium-sized printing company using the only skill she had: running a small press. That is how she discovered print was in her blood. She continued to learn the business and later took a position with sales against the advice of her then-boss, who warned the six-foot-tall woman that she was “far too tall to sell.” Brewton moved on to a better opportunity under a president who unlocked her potential and mentored her in all aspects of the business, from human resources to finance. “When he promoted me to president, he said I was the best man for the job!” she said.

Unfortunately, the company was sold and Brewton transitioned to a national company. There, she was tasked with developing a national business plan, which entailed combining over 65 plants across the country with different estimating systems and sales compensation plans into one overarching plan. She succeeded, but the six days of required weekly travel that came with the position started to wear on her.

At the same time, WebbMason Marketing was building a technology platform geared toward print procurement. Brewton’s experience with all phases of print made her the obvious choice to help with development. While laying the groundwork for this technology, she formed close relationships with many of its suppliers, and it made sense to take over procurement, a department that today oversees $70 million in spend in print and promotional products. As for the compliance part of her title? When the American Recovery and Reinvestment Act of 2009 came into play, printers needed to self-certify that they were HIPAA compliant. In response, WebbMason appointed Brewton to the compliance officer role, entrusting her to stay abreast of ever-changing regulations and prepare appropriate policies and procedures for data security as they apply to the health care and financial vertical markets.

What Brings Her Joy Professionally and Personally
I’ve been with WebbMason for 12 years and have been fortunate to use so much of the experience I’ve gained over the years to help them reinvent the basic distributor model into the robust marketing company they are today. I love the diversity of roles I’ve been selected to execute. As an added bonus, when they asked me to head up compliance, it put me in a position that allowed me to stay relevant with both my adult children, who are in technology and health care fields. This is so cliché, but the most joy I have in my life comes from being with my grandkids. Spending time with them is the most fun I’ve ever had.

Her Proudest Career Achievement
Early on, women were not readily accepted in the print industry. We could do all the work, but rarely got paid equal to our male counterparts. I realized that the only way to change that was through gaining power. The way to gain power was through effecting the bottom line, so I went into sales. Within three years I was Salesperson of the Year and quickly went through the ranks of management to become CEO. That put me in the position to level the pay scale a bit.

On Working in a Traditionally Male-Dominated Industry
This is a tough one. There are so many stories of inequity and harassment, I don’t know where to begin. If you’ve ever watched Mad Men, that’s really how it was, maybe a little worse. Women were lesser on every level, and there was no place to report harassment and still salvage a career. Sexual harassment was a given whether from other employees, the boss or customers. You had to be tough enough to stand your ground without giving up any of your dignity. You had to be willing to fight the fight and risk whatever ramifications happened. Let’s just say I’m quite the fighter.

At one point in my career, I moved to a large print conglomerate where I was tasked with developing a national sales program. My team [consisted] of women, not intentionally, but they were the only ones willing to take the risk on this new idea for sales. Within a year, we exceeded every goal set for us; however, when it came time to pay out our bonus, I was told we wouldn’t be getting them because our husbands already made a lot of money! Needless to say, a not-very-pleasant discussion ensued and action was taken to correct this. I wish I could say that the pay disparity and harassment were things of the past everywhere, but I can’t. Statistics and the news prove otherwise. We’ve made some great strides, but it will take women everywhere to recognize their value and stand up for themselves regardless of the career they choose.

Her Job Advice to Women
My advice would be to intern or talk to some seasoned professionals to get a real feel for the business. There are more aspects to this business than most people imagine. It can take you to the creative side or the business side. There are so many great possibilities.

Her Favorite Leader
I can’t say I have a favorite. I try to look at leaders from all walks of life to see what traits make people want to follow them and buy into their vision. The best way to become successful is to constantly re-evaluate yourself. Be introspective and learn to adapt or modify how you interact. For me, integrity is the most important trait a leader can have. I’m so old school. My word is my bond.

Her Upcoming Goals
There was a point in my career where deals were made on cocktail napkins. Today, everything is done in formalized legal terms, especially in the health care market. This next year I am focusing on making us even stronger in this vertical and achieving more certifications. On a personal level, I want to keep making my grandkids laugh. It’s the best sound in the world.

How She Maintains a Work/Life Balance
I’ve been fortunate to work from home for much of my career and learned that keeping a separate space for work and establishing some basic time frames for work is essential. It takes discipline. Fortunately, I have a dog that keeps me on a fairly good schedule. When it’s time to end the day and go for a walk, she’s unrelenting.

Additional Thoughts
My career in print and promo has led me to so many wonderful people and places. I’ve been involved with hundreds of print and promo facilities and businesses around the world. Everyone needs and uses our products for some aspect of their life. I’ve been able to work with some of the largest corporations and the smallest businesses and each one has taught me something about business and life in general.