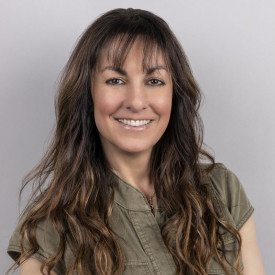 Everything changed in March 2020. While the novel coronavirus had been circulating in the U.S. for at least a month (probably longer), March marked the start of soaring hospitalization rates and deaths. One by one, states issued stay-at-home orders, shutting down non-essential businesses. It soon became clear that it was going to take more than two weeks to stop the spread.

That same month, Deborah Gaspar was leaving behind a familiar — and wildly successful — career on the distributor side of the promo industry to join supplier Chocolate Inn | Lanco as its new director of marketing. Taking her father’s advice, Gaspar wasn’t going to let anything shake her confidence or soften her edge. She had worked too hard to get her ideas heard over the last decade-plus.

According to her nominator, Gaspar spearheaded the 2021 rebrand of Chocolate Inn and Lanco into NC Custom — a name that pays homage to parent company Nassau Candy. “Deborah has been a tremendous driver in both strategic marketing for the individual brand lines and targeted marketing campaigns for NC Custom,” the nominator said.

Adding to that, Gaspar branded and created the company’s kitted line that was instrumental in drop shipping promotional gifts during the pandemic. She was also key in introducing the company’s best-selling item of 2021: a hot chocolate bomb.

Gaspar approaches each task with a marketer’s heart, so her love of promo makes perfect sense. One of her first jobs after college was as a marketing assistant for Ziff Davis, a magazine publisher turned digital media company in New York. She was part of the team that was responsible for choosing and ordering the merch and giveaways for the company’s trade show events. Her attraction to promo was immediate, and in this role, she learned what a powerful advertising tool it could be.

“I was always into merchandising and fashion as well, so I loved poring through the choices and choosing the items I thought other people would embrace, use and wear,” Gaspar recalled. “I vividly remember pitching a trendier hat at the time because I believed people would wear it and be advocates of the brand. Our earlier version of influencers, if you will.”

She was overjoyed when, a few years later, a friend told her a local promotional products distributor needed someone to lead its marketing team. She spent the next 10 years at Positive Promotions honing her skills and learning everything about the promo world. From there, she spent three years at distributor Vanguard Direct, where she helped grow its promotional products division from $2 million to $5 million in revenue.

Now at NC Custom, Gaspar manages a four-person creative and marketing team that is responsible for crafting all marketing messaging and collateral ranging from sales flyers and catalogs to email campaigns and social media. Furthermore, she actively participates in go-to-market strategies, along with business and product development efforts, merchandising and strategic marketing initiatives that extend to the AmuseMints Sweets & Snacks division.

Her Proudest Career Achievement
My greatest professional achievement was helping to create and run an entire promotional products division within a large NYC integrated marketing agency. When I joined the company, most of the revenue was being generated from large-scale print and digital media initiatives. The promotional products side of the business was an afterthought and not well established. When I first joined the agency, there was little-to-no strategy in place to successfully identify opportunities within the agency and figure out how to grow the promotional side of the business. I was brought on to create and execute an integrated, strategic marketing plan, which consisted of hiring approximately 15 or so team members spanning all departments, including marketing, sourcing, purchasing, web and sales. In just about three years, my team had successfully increased the business by over 150%.

On Working in a Traditionally Male-Dominated Industry
Unfortunately, our reality as women is that we still face workplace challenges that men don’t often need to think about or deal with. Of course, the issues are always magnified when you are a woman working in a male-dominated industry such as ours. I have been blessed throughout my career to have very powerful female role models, both in and out of the industry. I find when women are exposed to strong female leaders, they are more likely to embrace leadership roles and understand they have what it takes to succeed, regardless of gender. That is not to say I haven’t dealt with my share of challenges. When I was first starting out in the industry, I found it very difficult to be heard sometimes (especially in a room full of men) when I questioned some of the old norms or standards surrounding the marketing and development of promotional products and campaigns. I definitely had to fight to get some of my ideas heard and executed. But with persistence and perseverance, I was able to force change. My boss at the time termed it “relentless hustle.” Once others saw that my ideas were generating results, I was more respected. And heard. I must say what gives me so much pride and inspiration these days is seeing how the industry has evolved over the past five years or so. A transformation is happening through innovation, great products, new ideas and a fierce new generation of young women who are truly changing the face of the industry and what promotional products and marketing them means in this new age.

Her Job Advice to Women
Be confident and have an edge. My dad repeatedly told me growing up to never lose my edge or soften yourself because you don’t want to seem too overpowering or demanding. Successful women have an edge and speak their mind. Be brave. Don’t be afraid to speak up and share your ideas even if it goes against the norm. As a woman, you likely bring a totally different perspective to the room. Most importantly, find a mentor — someone in your organization or in the industry. There are some amazing women’s networking groups in our industry that I have loved being a part of. Seek them out and join one. There are no greater lessons than learning from women who have been there and done it.

Who Inspires Her
This may be an odd choice, but I have to say it’s Bethenny Frankel. I think there is no better example of a woman that not only has the hustle I so admire, but has successfully crashed into the male-dominated beverage industry. Most people know Frankel (if they know her at all) from reality TV appearing on the “Real Housewives of New York City” and “The Apprentice.” Although her television career is probably her most visible pursuit, she has said it’s not her most important one. “I went on the show single-handedly and exclusively for business,” Frankel has said. During the first season of “The Real Housewives of New York City,” she ordered a cocktail she’d later trademark, which she called “the skinny girl’s margarita.” In 2011, she sold the Skinnygirl Margarita brand to the liquor conglomerate Beam Suntory, the maker of Jim Beam, for a reported $120 million. The sale made Frankel rich. It also ushered in a new era of food marketing, inspiring female-focused innovations like Skinny Pop, Skinny Pizza and the Skinny Flavored Latte. Frankel once told a reporter, “I turned a brand around in, like, a year on television and nobody even knew that I was doing it.” I so admire her relentless hustle and how she managed to break into such a male-dominated industry.

Her Biggest Lesson Learned
The incredible importance of connections, networking, and finding role models and mentors. We all need teachers in our lives, both personally and professionally, especially when you are entering into an industry that has typically been male-dominated. Women supporting women is the best way to change an industry that puts a limitation on gender. This means that as women we must actively stand up for other women and lead by example. Being a woman in a male-dominated industry means that you will experience ageism, sexism and possibly sexual harassment throughout your career. By bringing women together, we can work smarter and not fold into old patterns of sexism in the industry. Finding success in a male-dominated industry is a challenge, but it is not impossible if you are willing to put in the work and generate results. Do not limit yourself to the expectations of others. Think bigger. Do bigger. There is always room at the table for those who are willing to earn their seat.

How She Thinks Companies Can Attract and Retain Female Talent
Put women in leadership roles. You can’t be what you can’t see. Entry level/mid-level women need to see a career path in the company and not that all leadership is dominated by men. Provide opportunities to network outside the organization. Create a great company culture that consists of professional development opportunities, values, clear mission statements, diverse and inclusive leadership, and leaders who are visible and accessible. A positive culture and workplace environment is what women often list as one of the most important things they look for in a company. If your company doesn’t have that, work to fix and improve it. It’s the only way to attract and retain good talent.

Her Upcoming Goals
For the first time in my career, I have stepped out of my promotional comfort zone (the distributor side of the business) and am now working on the supplier side. Professionally and personally, I love the idea of continuing to shake up the industry through innovative marketing ideas and product development. Continuing to innovate and push the creative and marketing boundaries completely fulfills me, both professionally and personally.

What She Wants People to Know About Her
I will always speak my mind. I learned at a young age that women are often taught to be “others-focused” and struggle between being assertive and not assertive enough. Throughout my career, I experienced a lot of women that just don’t ask for what they want. I realized early on the importance of speaking up and speaking your mind. My motto in life has always been: “Attract what you expect, reflect what you desire, become what you respect and mirror what you admire.” I find everything else after that falls into place.

How She Recharges
Great question. When I was in my 20s, I had taken a job at a start-up tech company and was working 100 hours a week. I eventually felt depleted and learned the importance of taking time for yourself. Now when I begin to feel exhausted or stressed out, I recharge by hitting the gym or having a spa day with good friends, and the occasional glass of wine never hurts.

How to Treat Burnout and Restore Employee Morale