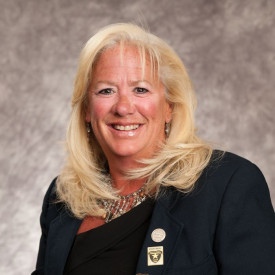 There’s no glass ceiling Michele Adams can’t shatter. When the pandemic began, she used her distributorship as a one-stop shop for PPE products, including sourcing, logistics, warehousing and fulfillment, earning her Proforma’s PPE Hero Award. As a member of the Women’s Business Enterprise National Council, Adams focused on supporting women-owned businesses during COVID. By the end of 2021, Proforma Global Sourcing was named the 255th fastest-growing private company in the U.S. on the Inc. 5000 Fastest-Growing Private Companies, with 1800% growth. That year, Adams also improved her previous revenue record by achieving more than $16 million in sales — plenty enough to secure a spot in Proforma’s 10 Million Dollar Club.

Adams owns (and operates) two other businesses in addition to Proforma Global Sourcing: Levy Recognition, a manufacturer of custom awards, and 2415 Albany LLC, a real estate holding company. She negotiates every high-level contract and manages all large programs, while overseeing her advisory board of directors made up of an attorney, an accountant, a financial planner and a CPA. Last, but not least, she’s a wife, mother and grandmother.

“Since joining Proforma in 2001, Michele has been an unstoppable force, quickly gaining recognition and respect among her peers,” her nominator said of the “laser-focused” entrepreneur.

So, how did Adams get here? Her promo story begins in 1982. At the time, Adams worked for a pharmaceutical company, where she was one of five women comprising an 85-member team of sales reps. She was at the top of her game. Her father, who owned an advertising specialty firm in Western New York, took note, and encouraged Adams to give the industry a try.

She spent many successful years as a distributor salesperson, never taking for granted the people she learned from, the conversations she was invited to or the programs she designed. When her children moved out to write their own chapters, Adams and her husband did the same. She joined Proforma as a franchise owner and landed a pivotal contract with a logistical supplier in Miami, which took her to Florida in 2005. The rest, as they say, is promo history.

Her Proudest Career Achievement
I am proud of all the large national and global programs I managed for my clients over the years. Program management and e-commerce became my core competency and my niche. I am extremely proud of the fact that during COVID I successfully supplied over 40 million people with PPE. I had worked very hard on my reputation for over 35 years in the ASI industry and I did not want my reputation tainted by non-delivery or goods because my customers and network trusted me. Believe me, this was important, especially when you are asking a client to pre-pay millions of dollars in order to procure those goods. Every single order was delivered in a timely fashion (some with a lot of drama), so it all worked out and I have developed several very strong relationships with procurement folks that I think will last a lifetime.

On Working in a Traditionally Male-Dominated Industry
When I first started in this industry in 1982, it was a male-dominated industry, but I don’t think it is any more. Promotional products, and even print, take a lot of attention to detail and I think that is something that is inherent to women.

Who Inspires Her
Any “boss lady.” I know most people would choose an individual figurehead, but the people who truly inspire me on a day-to-day basis are my peers. I thrive on other women business owners. They inspire me to be better. And they help me in my mission to encourage young women to be anything they want to be. My network of women business owners bands together regularly to show young women whatever they dream is possible.

Her Job Advice to Women
I would encourage it [working in this industry], especially if it is something someone feels passionate about. I have been very fortunate because I love what I do every day for 40 years and counting. I would also say it can be very lucrative financially if you can handle the irregular paychecks. I think this is the main reason I am very successful.

Her Biggest Lesson Learned
Always listen to what the client is telling you and always put their needs first. Be authentic. You can’t fake it to make it.

Her Upcoming Goals
I have a buy-sell agreement in place for one of my companies with two employees who have been with me for over 10 years. I am attempting to unload all of my industry knowledge and 40 years of experience to make the transition as smooth as possible. I spend a lot of time mentoring women both inside and outside my organization.

What She Wants People to Know About Her
I am very passionate about everything I do.

How She Thinks Companies Can Attract and Retain Female Talent
Be flexible. Be understanding about the fact that, in many cases for women, life gets in the way. We may not work the same way men do, but we make up for it by working harder.

How She Recharges
Visiting my grandchildren. Doing anything creative. I love interior decorating or gardening or cooking when I have time.