Antimicrobial Coatings for Print: Yes, No, and Maybe

Word has been circulating in the printing industry about coatings that protect not just against scratches and scuffs, but reportedly against the spread of disease.

Full stop: these so-called antimicrobial coatings for printing substrates exist, and they offer genuine benefits. But, although the coatings may do everything their manufacturers say, printers must use caution when stating what the products are intended for: the U.S. Environmental Protection Agency (EPA) forbids any and all public health claims based upon their use.

This means that antimicrobial coatings can’t legally be promoted as preventative measures against COVID-19 or any other sickness. Nevertheless, their advocates believe they have an important role to play in creating the clean environments that consumers will insist on inhabiting even after the pandemic is under control — as long as statements made about them don’t transgress what the EPA permits.

But, misinformation abounds. Gary Jones, director of environmental, health, and safety affairs for PRINTING United Alliance, says that the “wild, wild West” atmosphere of ill-informed claims surrounding antimicrobial solutions forces would-be adopters to “fill in the blanks” about what works, and what doesn’t. Moreover, test results cited to validate the claims don’t always align with the way germs behave in the real world.

John P. Beadel, president of Associated Printing Productions Inc. (APPi), in Miami Lakes, Fla., came to this understanding as he looked for a way to repair some of the damage the pandemic had done to his commercial printing business, which caters to South Florida’s hard-hit cruise line, hospitality, and leisure industries. He says that one of his customers — a well-known cruise fleet operator — was desperate for an escape from the “PR nightmare” it was embroiled in: “anything that could stop this potential transmission.” 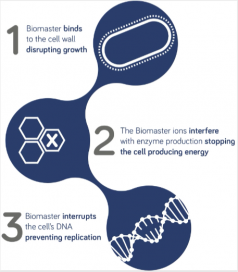 Beadel had heard about antimicrobial coatings, but he says he became suspicious of the unsupported claims made by the suppliers he approached initially. His due diligence eventually led him to two sources he invited into a trusted partnership: Biomaster USA, the U.S. distributor of an antimicrobial agent made by Addmaster Ltd. in the U.K.; and coating manufacturer Ctg2 Technologies, which blends the agent into a line of coatings it calls SHIELD and Beadel markets to his customers as APPi Antimicrobial Protection.

The active ingredient, registered with the EPA as an approved antimicrobial substance, is based on silver ions — charged particles that keep bacteria from growing, producing cellular energy, or replicating. Charlie Matthews, co-owner of Biomaster USA, explains that when the Biomaster technology is incorporated into a product such as a coating, the product then becomes a “treated article” that is exempt from further registration requirements by the EPA.

Printers who use Biomaster-infused coatings thus are free to repeat whatever the manufacturer permissibly can claim in the U.S. about the solution’s antimicrobial efficacy: for instance, that it provides effective and lasting antibacterial protection for the lifetime of the product it is being applied to. It’s also legitimate to state that a surface coated with Biomaster silver ions will be “99.99%+ cleaner” than an uncoated surface, according to Matthews.

But the water’s edge for publicity, as far as the EPA is concerned, is disease prevention. Matthews says the agency has “a whole list of things” that printers can’t assert about what antimicrobial coatings do, including claims that they are effective against the COVID-19 virus or any of its cousins. (The guidance document is EPA’s PRN 2000-1: Applicability of the Treated Articles Exemption to Antimicrobial Pesticides.)

He points out that even if scientific data in support of the claim were available, using language like “COVID killer” would still be verboten unless the coating had been registered with the EPA as a disinfectant: a process, according to Matthews, “that would take millions of dollars and many years” to complete.

But the semantic confusion hasn’t dampened anyone’s curiosity. John Honaker, president of Ctg2 Technologies, reports being “inundated” with requests from printers as far away as Thailand for information about antimicrobial coatings. “I’ve lost count,” he says.

In response, the company published a “quick points” summary of the benefits and the limits the EPA places on what can be said about them. Honaker says he even offers to edit customers’ promotional materials about antimicrobial protection so that they don’t run afoul of the rules.

Beadel says he was contacted by “500 printers from everywhere in the world” after talking about his antimicrobial partnership in a 1:1 video interview with Printing Impressions. One outreach came from an Italian firm that was even prepared to charter a plane to deliver the eight barrels of the antimicrobial coating it wanted.

Beadel refers those who contact him to Ctg2 Technologies, advising his inquirers to be careful about statements they make on the subject.

“We’re very adamant — don’t make unfounded or illegal claims,” Beadel emphasizes. “You can’t say that it protects the person. You’re not coating the person, you’re coating the product.” On the other hand, it’s fair to assert that the Biomaster/Ctg2  combination affords “permanent protection of your printed product” within the scope of EPA’s permission.

Another printer that uses a UV coating with Biomaster silver ion technology, The John Roberts Company in Minneapolis, chooses its words with precisely this kind of care. A promotional document titled “Eliminating Dirty Little Secrets” says that while the coating can’t ensure that COVID-19 specifically won’t be transmitted on printed items, it can greatly increase the cleanliness of printed materials.

Anything that is reused or passed between multiple people — for example, restaurant menus — is perfect for antimicrobial treated UV coating, the document states.

Scott Zorn, VP of operations, notes the company has been advised by its coating supplier that allowable claims include inhibiting growth of mildew and micro-organisms that could cause spoilage, fouling, odors, and stains. The advice further indicates that “antimicrobial,” “fungistatic,” “mildew-resistant,” and “preservative” are acceptable terms for exempt treated articles like coatings as long as they clearly are not being promoted for public health benefits.

Zorn adds that the antimicrobial coating John Roberts now offers “is not a cure for anything.” Rather, it’s a way to ensure cleaner printed surfaces, which brings peace of mind the way wearing a mask does. The coating, in either UV gloss or satin finish, can be applied from an anilox chamber tower coater on an offset press. Aqueous and digital versions also are available. Zorn says John Roberts has found the products to be compatible with any substrate, including synthetics and plastics, that accepts standard UV coatings. 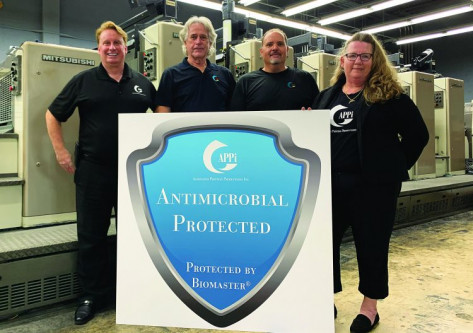 A consumable that combines ease of use with peace of mind is certain to catch the attention of printers in the hyper-sensitized climate surrounding COVID-19, even if the product can’t be advertised as a weapon against the pandemic. Polymeric Group, a maker of industrial inks and coatings with roots in the screen printing industry, is one supplier that recognized the opportunity long before the outbreak struck.

This was in 2011, when the company developed and patented SilvaKure, a silver-ion-based additive for its FORTIFI line of UV-curable and water-based functional coatings. Polymeric Group now offers to license its SilvaKure coating technology to other companies seeking a first line of defense against microbial contamination and its ill effects. A press release said efficacy testing had shown FORTIFI to be “up to 99.999% effective in
preventing bacterial growth for common and problematic bacteria.”

The coatings use an EPA-registered active ingredient, but the entire coating must be tested for efficacy against biological and viral agents before any benefit statements can be made for it. Terry Amerine, the company’s VP of sales and marketing, says Polymeric Group plans to seek EPA registration once it has the necessary testing data.

Using Safety as a Selling Point

Amerine believes that because of the heightened awareness of risk driven by COVID-19, “virtually any customer” would welcome having their printed products treated with SilvaKure-augmented FORTIFI coatings. “Creating environments that customers feel safe in is tantamount,” he says. This convinces him that antimicrobial protection will move from “nice to have, to have to have” as a specification for printed materials of all kinds.

For example, a hotel that once might have balked at the added cost of antimicrobial wall coverings now would see the expense as necessary to reassuring its guests. A decision whether to germ-proof retail signage, likewise, would come down to “where does it have to be, versus where does the customer perceive it needs to be,” Amerine says.

“This is risk mitigation, not risk elimination,” Amerine stresses. Nevertheless, he thinks that because people’s desire to be protected from germs will not end with the suppression of the pandemic, the market for microbe-blocking printed products will continue to grow — especially when it comes to menus and other items “with a high degree of retouch.”

Beadel says he is seeing this kind of urgent demand from his cruise-line customers, who want their passengers to know they are sailing in “sterile cabins” with equally sterile printed matter such as daily bulletins of shipboard activities. He identifies theme parks, resorts and hotels, gyms and spas, hospitals, schools, airlines, and senior centers as other prime markets for antimicrobially-coated print.

Bigger Than One Company

Beadel describes his partnership with Biomaster USA and Ctg2 Technologies in altruistic terms, framing it as an effort to educate the industry as a whole about the proper use and promotion of antimicrobial coatings.

“Early on, we realized that this was a lot bigger than me or the company,” he says, adding that this explains why the partners haven’t attempted to patent the coating or price it to whatever the market will bear. Honaker affirms that although customers have told him he could have charged them more for the product, making it affordable for printers to use was the main objective.

“The industry needs it,” he says.

Amerine says Polymeric Group also wants to form cooperative partnerships that will open up the right channels for its antimicrobial FORTIFI line. He acknowledges that while the company has patents to protect, it would be “silly” to try to dominate the market for antimicrobial coatings when licensing clearly is the best solution for everyone.

“We see a bigger purpose here,” he says. “We need to get the coatings into the market as broadly and as quickly as possible. This trumps business right now.”

For Beadel, gaining access to antimicrobial coatings has been a matter of business salvation. He says that APPi, established 29 years ago, “broke records last year” and posted an equally impressive performance in the first quarter of 2020. Then came COVID-19 and losses more “devastating” than any printer wants to contemplate.

Now, being able to offer antimicrobial coatings to his customers is helping him to find a way back, and he wants to share the remedy with other printing companies that have landed in the same tough spot. “We have to take care of each other,” he declares.

Patrick Henry is the director of Liberty or Death Communications. He is also a former Senior Editor at NAPCO Media and long time industry veteran.