Political uncertainty has prevailed this year, but research from the United States Postal Service (USPS) is shedding light on at least one issue surrounding the tumultuous election season: the swing vote.

As campaigns try to break through the noise and establish a connection with swing voters, the question becomes, what is the best way to make a persuasive and motivating impact on these individuals? Findings from a new online survey, conducted by Summit Research on behalf of the USPS, spell good news for the direct mail sector.

According to the survey, which was conducted Aug. 11 to 22, 2016 among a national sample of 1,398 adults, more than half of swing voters responding (58 percent) said direct mail is either “very helpful” or “somewhat helpful” in deciding how and whom to vote for, beating out other mediums, including television (55 percent), online (48 percent) and email (46 percent). 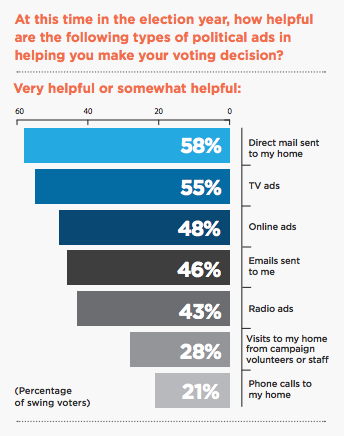 “When political races are tight, campaigns need to know what influences swing voters,” Cliff Rucker, vice president of sales for the USPS, said in a statement. “Political mail spending has increased nationally by 50 percent since the last presidential election. As campaigns use more mail, it’s all the more reason to explore mail’s impact.”

Millennials, the demographic between the ages of 18 and 35, present another opportunity. In spite of their tech-savvy nature, 62 percent of millennials surveyed found a mix of online ads and political mail to be useful in voting decisions—just behind television ads (67 percent) and ahead of email (59 percent). Furthermore, nearly four in five millennials surveyed (79 percent) check their mailboxes at least five times a week, with 66 percent doing so on a daily basis.

Political mail also works well as an educational tool, particularly when it comes to securing support with early voting. Surprisingly, the USPS’ survey found the vast majority of likely and swing voters were uncertain of the last date to apply for an absentee ballot or the earliest date to vote early.

To see other key findings from the survey, click here.