No matter which vocation a person practices, having people to rely on for continuous support can prove vital to that individual’s chances for obtaining success. What can happen if, along with being in his or her corner, those helpers are in the seeker’s family tree and work alongside that aspiring professional? For the Bilyeu, Scala and Schulty families, such fortunate ties have bolstered their identities as print and promotional products industry mainstays, and Print+Promo had the pleasure of learning of those bonds by connecting with Brad, president and CEO, and Kris Bilyeu, vice president and chief financial officer for Tabco, Terre Haute, Ind.; Chris Scala, account executive with Suncoast Marketing, Fort Lauderdale, Fla.; and Taylor, sales and marketing director, and Vicky Schulty, president of AmeriPrint Corporation, Harvard, Ill.

We learned through the theme song to “Cheers” that making our way in the world today takes everything we have within us, and while our sources, owing to the great amount of diligence that they have devoted to their calling, would not reject that sentiment, they do feel grateful for having had familial guidance as significant parts of their journeys. They have also reveled in being able to provide input to their relatives in professional settings, building their respective companies’ reputation in the process and honoring the sacrifices of their kin.

“I have great appreciation for everything that he has done, and I know that’s the case with my brother, too,” Scala said of his father, Suncoast President Bob Scala, and the regard that his sibling, Greg, a fellow account executive, has for their patriarch. “We have a rapport that makes everything go pretty smoothly because we know how our customers want to be treated. Even if we weren’t related, though, I think that our consciousness of those needs would be a key contributor to who we are as a business.”

2019 marks the 36th anniversary of the oldest Scala’s connection to Suncoast, with Chris and Greg celebrating their 12th years as hires. Their united tenure has afforded Chris ample opportunities to build on the knowledge that he gained while assisting the company as a high school student, and has led him to consider his employment “a way of life” and not just a means to sustain himself. Crediting his father for that stance’s maturation, he esteems his time at Suncoast as a chance to tighten his familial bonds while not feeling as if they are constraints.

“When you’re working on 100 percent commission, you have to be on the go constantly, so my dad pretty much stays out of my hair,” Chris said, with a laugh, of operations at the Florida business that ranked 46th on Print+Promo’s 2018 Top 50 Distributors list. “There will be an occasional butting of heads, but that link we have as family makes everything more fluid as we strive to grow.” 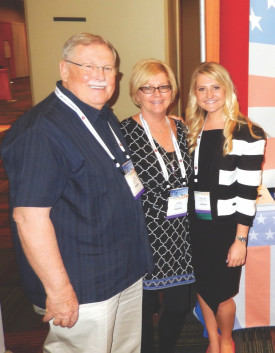 Taylor Schulty has also benefited directly from interaction with not one but both of her parents, mother Vicky and father Jim, who serves as AmeriPrint’s executive vice president. Having not envisioned holding a job with the family business, the youngest Schulty representative gave the idea a try and feels her five years there have exceeded her expectations.

“There are many benefits to working for your family,” Taylor said. “I think one of the major benefits is having an open line of communication and honesty, whereas some conversations and issues may be harder to address without that family relationship. The flip side to having that comfortability of working with your family is that it can also create issues. There is always the chance the line of communication could become too comfortable for work situations.”

The Bilyeus have fostered the same sense of fortune over working together, with the brothers quick to praise the precedent established by their father, Tabco founder Tom Bilyeu, as their chief motivator for achieving personal distinction.

“People would tell me my dad could sell anything, but it was not as much about selling as it was serving,” Kris, who has been with the company, whose name comes from his father’s initials, since 1991, said of the sire, who passed away in September. “He set an example for us as he lived his life and served customers. He always said don’t worry about the money, take care of the customer and the money would take care of itself.”

As for a mindset that their fallen father engendered within them that the two will forever carry, Brad could not contain his loquaciousness.

“We do not like to lose, but we have come to realize that you simply cannot win them all,” the older Bilyeu boy, who has logged 39 years with Tabco, said of an instructional principle that influences the brothers’ business and nonprofessional lives. “That’s still a tough nut to swallow for us. We have refused to play ‘the game’ where money buys opportunity and telling untruths to get to an end is acceptable.

“Dad taught us to be honorable, work hard, yet smart, and always tell the truth no matter how much it hurts,” Brad continued. “Many competitors just simply do not do that, and when you face that kind of competition, just do not go there. When you do the right things at work, you are also honoring your family and your heritage.” 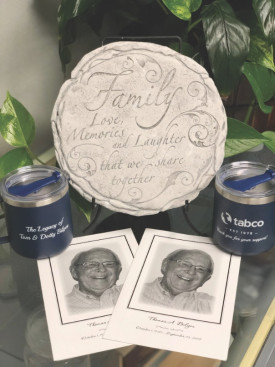 Because all fields are rife with competitive spirit, striking a balance between professional duties and off-the-clock interests can be difficult for today’s workforce. Employees can find themselves utterly overwhelmed in having to address the needs of their businesses, so one could wonder if having to tend to those tasks in the company of a relative, who is also earning his or her keep in the same building, makes life more manageable or worrisome, especially if family members are working on the same sort of tasks. From the Bilyeus’ standpoint, people must remember that no matter whether workers are related, a common goal exists among them.

“The benefit of being a part of a family business is being together as a family, and the snag is being together as family,” Kris quipped of such a key component of his life at Tabco, which ranked 39th in the aforementioned Top 50 Distributors roundup. “Work runs over into family gatherings, and you seem as if you never get away from it. We get along very well, but we do have different outlooks on the way to do things.

“We had a time where if we disagreed on something, we would do nothing, due to the respect we had for the other,” he elaborated. “But, doing nothing was not always a good option. We have gotten much better at that.”

“I can honestly say our business interactions have absolutely zero influence on our non-AmeriPrint identity. We are a very close family,” Taylor said of the Schulty crew, with her mother adding that “[they] have a very good balance of keeping business talk during work hours and focus on family on the off hours.”

During the shared time together, what resounds as the biggest lessons to gain for businesses whose difference makers share a last name? For Chris Scala, the answers involve knowing that the circumstance offers an opportunity to grow on two levels: that of a hire who wants to assist a colleague’s comprehension of a company’s mission while helping to form and tweak that principle, and that of a confidant who wants to help a kinsman grow professionally.

“No matter what your title is, if you’re working with relatives, you’re all in the same boat in terms of wanting your name to become synonymous with success,” he said. “That shouldn’t be any different than wanting your company or business to excel, too.”

It’s hard to believe that nearly a quarter of 2019 is already behind us, but the rapid pace that marks contemporary life does not stress out the AmeriPrint, Suncoast and Tabco teams. In fact, they find the accelerated nature of the business world a welcome extension of the changes that are going on in their non-work lives, with the alterations providing an opportunity to test their might as workers and grow their connection as flesh-and-blood cheerleaders for one another.

“In our world, it is not bad to know what others are doing, but we do not spend time studying this, as our time is better spent looking forward with our own processes and programs,” Brad Bilyeu noted. “… Simply put, we have no constraints or ideologies that we cannot let go of or are confined to. We do not hesitate to venture into the uncharted territories after a reasonable study, and we welcome these changes as opportunities until they prove themselves not to be. Then, it is on to the next.”

“While business is constantly changing, having family around gives you something constant,” his brother added.

“Knowing there is someone who has your back, whether you are right or wrong, allows you to take some chances and make some mistakes.”

For Vicky Schulty, who beamed over the family’s recent addition of its first grandchild, industry changes prompt “constant contact” among her family members at AmeriPrint, a Print+Promo 2018 Top Suppliers honoree, with Taylor noting that the positive attitude with which her parents raised her will be plenty to guide them all through whatever 2019 brings their way. The Scalas will call on that same sense of stability as they look to evolve.

“If you’re fortunate enough to be a part of a family business, I think you’ll stand a decent chance of wanting to maximize your potential even more,” Chris said. “I know that some people rebel when it comes to continuing their families’ traditions [as business owners], but I think you start out on a positive note if you’re working with people who care about you more than as a worker.”