Family Ties are Helping Many Print Businesses to Thrive

We have all heard of—and perhaps worked for—companies that pride themselves on treating their employees as if they were family members. What must it also be like, then, to have actual relatives along for one’s professional journey, united in the cause to make others feel like extended kin? For Mike Meshkati, the president of SinaLite and the son of the Dublin, Ohio-based wholesale trade printer’s founders, Oscar and Fara Meshkati, having such backing creates a sense of invigoration and focus as the two generations work jointly to deliver on their shared vision for the company.

“Personally, we love the family business model,” Mike Meshkati, who has been with the company for 19 of its 21 years, said. “We treat each other with a level of respect and compassion, which does not typically happen in a corporate environment. There is a level of trust and loyalty with your family. One benefit, in particular, is that you can always rely on a family member to take care of a task or project to their best ability. The downside, or snag, is [that] every family gathering is sure to turn into a  business meeting.” 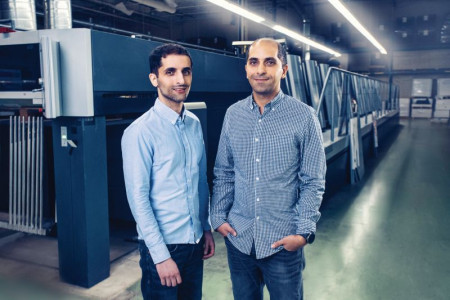 Pictured, from left, Brian and Mike Meshkati have furthered the SinaLite mission that their parents began in 1999.

He accurately summarized what today’s collection of family-run businesses experiences. Certainly in the minority in the overall commercial sense, such printers prosper because of their ties, gladly welcoming each opportunity to grow not only as a service provider, but also as a tight-knit clan. Along with his parents, Mike Meshkati guides SinaLite with input from brother Brian Meshkati, the company’s vice president of marketing. Print+Promo connected with the siblings, along with Cheri Miroballi, vice president of sales for TABBIES, a Div. of Xertrex International, Itasca, Ill., and her brother, Chris Cunningham, who serves as the vice president of TABBIES and the owner of Xertrex International; and brothers Bill and Terry Richards, partners at Victor Printing, Sharon, Pa., to see how their familial bonds strengthen their operations, help them overcome setbacks and encourage the acquisition of new business in an era of stern competition and cutbacks. 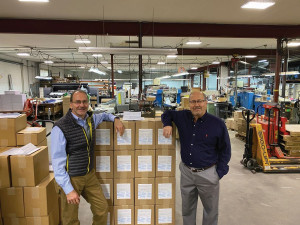 All together, these three businesses have logged 187 years of being reliable partners for clients with various callings, with Victor Printing being the granddaddy of them all thanks to having 101 years to its name. In fact, it was Bill and Terry Richards’ grandfather, William V. Richards, who started the brainchild in his parents’ basement and eventually paved the way for his son, William J. Richards, to helm the trade printer. As a result of the brothers’ decades of involvement with the company, which has included their ascension to ownership responsibilities, they revel in being able to discuss ideas with each other and implement strategies to further the Richards’ legacy.

“We’ve always been pretty driven to succeed, and, yes, I’d say that was a result of being able to learn so much so early on,” Terry Richards said. “As the years have gone by, knowledge of products and services has meshed with our devotion to customers’ needs to make us more viable, and we credit our success to so much, including being brothers.”

Loving the “ink-on-paper world” since his childhood introduction to it, Terry Richards has joined with Bill Richards to be tireless advocates for tenacity no matter the odds. The Richards bred great results through that mindset back in the 1980s, with business forms distinction—courtesy of short and medium runs—being a chief source of their revenue, and resiliently weathered the 2008 financial crisis through which, Bill Richards lamented, they lost a quarter of their business in one night.

“The commercial world is an ever-evolving landscape, and it’s claimed many dreams and given others immense hope,” he said. “We’re fortunate that we’ve been able to call on each other and a great staff to see us through everything, and we’re always planning our next moves to keep Victor Printing thriving.”

Miroballi and Cunningham, having received priceless tutelage from grandfather Walter and father Dennis, enjoy being key cogs in the identity of a 65-year-old manufacturer of filing, indexing and labeling products. Like the Meshkatis and the Richards, they consider fostering a familial feel to their business as an operational necessity and have not seen their passion for their pursuits dip one bit in their tenures.

“Nobody is a number here,” Miroballi, who takes particular pride in handling “the people side” of TABBIES’ existence, said. “Because Chris and I share a bond, it’s natural for us to extend that to our workers and to lead them to greatness, too.”

“Being a part of a family-run business, I think it’s big to look for who and what will fit in your environment,” Cunningham added. “There are so many people out there who are looking for someone’s business, and we think that because we have actual blood bonds and ones that are like [extended family who] see us as reliable and having their absolute best interests at heart. Those are great responsibilities to have, and our family makeup helps us never to lose sight of them and the importance of the roles that we have.”

As young adults whose families own businesses plot their careers, it is not uncommon for them to choose their own fields. Brian Meshkati, for example, had intended to become a corporate lawyer. After being accepted to a couple schools, he ultimately elected to become a second-generation leader at SinaLite.

“One day, a few months before I finished my undergrad [education], my dad approached me and asked me if I was interested in joining the family business,” Brian Meshkati, who is approaching nine years with the company, said. “… It was a tough choice, but I decided to join the company to help support my family. I thought about the sacrifices my parents made to build a business we could one day take over. I saw the hard work, dedication and passion they had for the business, and this was an inspiration to me.” 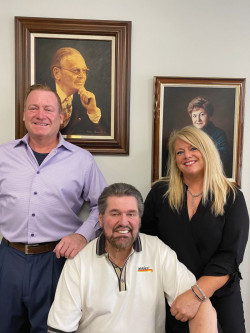 Citing the tremendous respect that he and his brother have for their parents, the younger Meshkati son further commended them for keeping prevalent at home and in the workplace their core family values, namely, honesty, respect for all and kindness. Forward-thinking in their approach, SinaLite’s creators encouraged their children to be innovative and push past the status quo. The eagerness to do so, therefore, has made their employment anything but a job, a trait that they have in common with the TABBIES and Victor Printing duos.

“There’s good stress surrounding what we do,” Cunningham said. “We will always esteem what our grandfather and father did to make TABBIES possible, and it’s exciting to be leaders who not only care about existing clients, but who also look for new markets to excel in.”

“It’s great to say that we have been around for more than a century,” Bill Richards added. “When you reflect on that, I think you realize that there’s been so much on-your-toes thinking that has occurred, and that has inspired great relationships with clients and a stronger connection to those who help you to excel. In my case, I’ve had my family by my side, and what’s better than having that?”

Based on those assessments, one could be inclined to say that as each “passion project,” which is what Brian Meshkati dubbed SinaLite’s existence, has evolved, it has become a natural result for the families’ kinship to increase. As their commercial tasks mesh with outside-the-office goals, too, these relatives are all enjoying experiencing that duality, with each knowing it is rooted in truly knowing one another and growing as people.

“Business and family tend to overlap now that all of our family members work together daily,” Brian Meshkati said. “The vision of growing the business has become a family bond that ties us together, as we are all working toward a common goal.”

We always hear that business finds itself in a perpetual state of change, so how does being a part of a family-run operation ease the handling of those shifts and increase the likelihood of being better prepared to thrive among a large pool of corporations? For Mike Meshkati, the answer lies in always keeping one’s thinking cap in place and never compromising on quality.

“We believe that you can always learn something new and improve your skill set, process and efficiency,” he said. “Continuous learning keeps you on top of current industry trends and open to opportunities for growth.”

He, his sibling and their parents are staying true to those points by making this year all about expansion and growth for the Meshkati and SinaLite families. Having expanded their employee count to 150, they are relying on their industry knowledge to add apparel to their product portfolio, within the coming months. At TABBIES, similar affinities for expansion are proving insatiable, especially through advances in digital techniques and data collection.

“We enjoy keeping up with changes in the industry, adapting to them and using them to come up with ideas for our customers,” Cunningham said. “It’s key if you’re able to add diversification to your portfolio and belong to as many associations as possible to keep up on trends and to see where you can inject your ideas.”

“Whether you belong to a family business or not, that attention to detail is huge,” Miroballi added, “and if you do belong to one, it’s even more important because you’re looking to sustain your family’s history of success. We think we owe at least that to our grandfather and our father.”

The Richards brothers also ponder where the future could lead their company, which they hope attains more clout in the wide-format and signage areas.

“There are always challenges when running any sort of business, and since we’re part of one that dates back to 1919, we’re deeply invested in prolonging our family’s influence in the world of print,” Terry Richards said.

“There will always be a need for the services that we provide,” Bill Richards added. “With my brother to be someone I can share ideas with, it’s important to me to predict where we’re heading and who’s going to join us as we honor what our dad and our grandfather gave us the opportunity to do.”