The following article was originally published by Promo Marketing. To read more of their content, subscribe to their newsletter, Promo Marketing Headlines.

By day, Michael Williams is sales manager, national accounts, for AZX Sport/Simplified Sourcing, a promo supplier based in Burlington, Ontario. By night, Williams is … [movie-trailer-guy voice] the Game Master.

Or, he was, anyway, during last year’s pandemic lockdowns. That’s when Williams started “Quarantime,” an interactive party game that began as an impromptu Instagram Live hangout and ultimately became a way for a socially-distanced community to stay connected while raising thousands of dollars for charity. But let’s start at the beginning.

On March 15, 2020, Williams learned that Ontario would be going into lockdown effective March 17—St. Patrick’s Day. With his plans suddenly canceled, Williams started thinking about how he could make the most of the situation and celebrate safely with friends. Online party games seemed like a fun idea, so Williams, green beer in hand, fired up Instagram Live on St. Patrick’s Day night and started hosting.

“It was my first ever Instagram Live—I had no idea what I was doing, but people were engaged, laughing and having a good time,” he recalled. “It was at that moment where I realized I could come up with a few weeks of interactive games with the main goal of having fun, staying positive and allowing myself the ability to interact with friends during lockdown. I mean, how hard will it be—lockdown is only going to be a couple of weeks, right?” 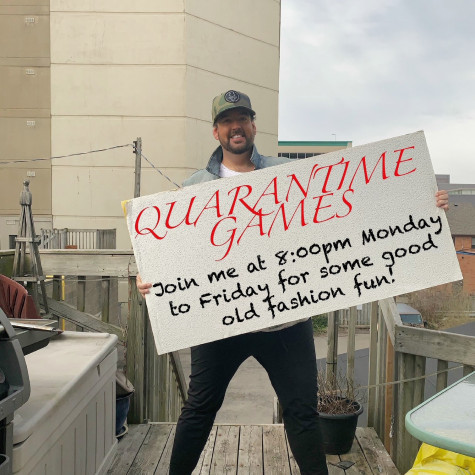 That prediction turned out to be spectacularly wrong, of course, but Williams had already committed. He officially christened his game night “Quarantime” and logged on every weeknight at 8 p.m., leading his Instagram audience in trivia, bingo, “name that logo,” “flags of the world,” “guess the movie quote” and more. (Williams’ personal favorite: “name that Quarantune.”)

The original goal was to have fun, connect with friends and support small businesses via nightly prizes, with winners receiving products from local shops or gift cards to family-owned restaurants in the area. But as the weeks went on and the scope of the pandemic became clearer, Williams soon realized the potential to do more.

“I noticed the number of players growing steadily—new followers, increased interaction, as well as a ton of powerful messages expressing their gratitude for my efforts,” he said. “Quarantime continued to grow a loyal following, and people began reaching out wanting to help offer support … but did not know how or where to begin. Every day I was hearing more and more about PPE shortages, and it dawned on me that I could create a fundraiser to purchase masks for a local hospital.”

Williams knew the difficulties hospitals were facing in acquiring PPE. He also knew he could get good-quality, medical-grade masks through AZX, which had strategically shifted to PPE at the start of the pandemic, investing thousands of dollars in safety and compliance and rigorously vetting its supply chain. Williams set out to raise $1,000, hoping to purchase a small number of masks for the hospital. The Quarantime community smashed that goal, raising $3,000 and donating 5,000 masks. 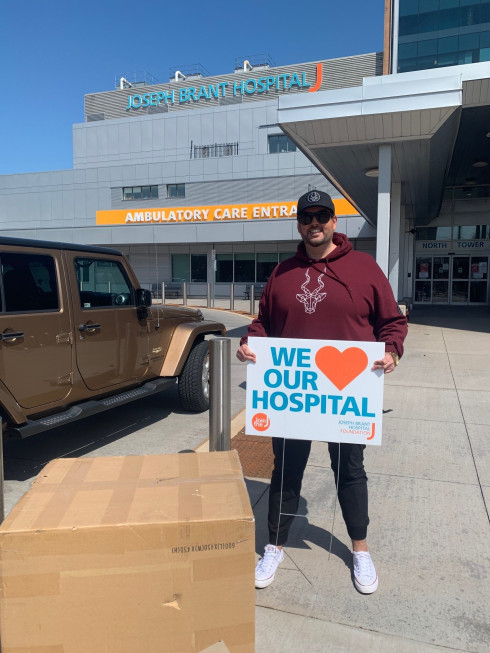 Through Quarantime, Williams helped raise $3,000 to buy 5,000 medical-grade masks for a local hospital.

Quarantime went on for 16 straight weeks, with Williams hosting five nights a week. By the time the initial lockdowns lifted, he’d spent 4,420 minutes hosting and another 6,385 minutes prepping for games, according to his tally. In addition to the hospital donation, he’d given away $1,200 in prizes supporting local businesses.

Most people would have stopped there, satisfied with their efforts and exhausted from the grind. But not the Game Master. Each holiday season, Williams hosts an ugly sweater party to raise money for SickKids, a pediatric teaching hospital in Toronto. With pandemic restrictions still preventing large gatherings, Williams instead brought back Quarantime for a one-week, holiday-themed charity edition with a promotional products twist.

“My goal was to raise $1,000 for SickKids, and I also wanted Holiday Quarantime to help fill the void of people not being able to see their friends during the holidays,” he said. “… Understanding the power of promotional products, I knew I could raise more money if there was some swag in comparison to a simple entry fee. I created packages ranging from $20 to $100. These packages not only included an entry fee to Holiday Quarantime, but some fantastic products including socks, beanies and a blanket.” The event raised $12,000.

Adjusting to virtual communication during the pandemic was a challenge for just about everyone. A year later, Zoom fatigue is real. By now, most of us are ready to get back to in-person meetings and communication. Williams counts himself among that crowd. He misses traveling, seeing new places and making memories in-person. But he also sees the positives virtual communication offers, especially for print and promo professionals.

Some of the promotional products packages Williams assembled to encourage entry in his Holiday Quarantime fundraiser. The virtual event smashed its $1,000 goal to raise $12,000 for a hospital foundation.

“In recent years, the challenge of maximizing the time in territory has become more difficult,” he said. “A typical day on the road would allow for maybe two to four meetings depending on the city, but the virtual world has allowed me to have up to 16 meetings in a single day. There are many distributors with remote reps or smaller offices around the globe who don’t receive the same in-person experience because of location. The virtual world has given the ability to connect more globally and interact with the full team.”

Screens may never be able to truly replicate or replace face-to-face interactions. But that doesn’t mean it’s impossible to make real connections through virtual communication. Williams says his experience with Quarantime is proof.

“Regardless of being in-person or virtual, I am a big believer that the key to success is playing the hand you are dealt,” he said. “We have all been on Zoom calls where a dog barks in the background, there is a child screaming or wants a snack, the doorbell rings, internet cuts out or someone has something interesting in their background. Use these moments to share a laugh and build friendships. The virtual world has allowed us into people’s homes and to find commonalities that will allow you to build lifelong relationships—much deeper than just business.”

A Little Something Extra: How to Add Value to Your Promo Orders