How to Secure Sales and Prevent Fraud with Checks, Prescriptions and Vital Records

If you think business-to-business check printing is declining, you’d be wrong, according to Heather Campbell, marketing manager for TROY Group, Wheeling, W.Va.

“There was a point in time a couple years ago when check printing was actually starting to decrease a little bit, and what we’ve seen is an uptick,” she said. “And [from] a B2B perspective, one of the last numbers that we’ve counted is at least 95 percent of businesses are still printing their accounts payable, their payroll. They are still using checks as their No. 1 form to make payments.”

The reasons include liking the feeling of a physical check and finding a more economical option when faced with rising electronic payment bank fees, she added. Also, with cyber threat fears, companies are reallocating their security budgets to prevent data breaches.

“But what they’re not doing—they’re not increasing the security that’s on their actual printed checks, and that’s where we come in,” Campbell said.

Today’s counterfeiters are constantly shifting their tactics, so suppliers are designing more ways to outsmart them. In response, Wilmer recently introduced three new technologies, Dorsten said. Those features include the digital verification grid in the endorsement area on a check’s back that disappears when copied, a V-DOT pattern in the upper lefthand corner that triggers newer copiers’ anti-fraud chip, and pigment-based ink that absorbs into the paper and, therefore, can not be removed unlike a pantone-based ink that lays on top of the paper. 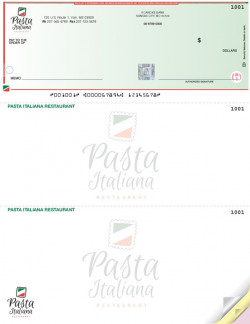 DFS offers customized checks with a variety of security features.

Aside from security features designed to fool criminals, others are federally regulated. For example, Wilmer increased the MICR area—where all the bank and account information is printed in magnetic ink—from 0.5" to 0.625" in order to remain compliant with American National Standards Institute (ANSI) regulations that are expected to change this month.

“We have someone on the ANSI board, and she has advised us that these standards are getting ready to change here in 2020, so we took a preemptive strike on that,” Dorsten said of the expected rule change and vote schedule for after press time. “... A lot of our distributors appreciate when we go ahead and do that for them so their customers don’t get their checks rejected.”

The work doesn’t end with new security. Suppliers frequently recommend selling a good mix of security options—the more features included, the more difficult it is for counterfeiters to replicate the check successfully. Many suppliers offer different levels of security, with the number of features increasing on the more secure checks. Something like the void pantograph on its own isn’t very secure due to evolving printer technologies, Dorsten warned, but there are others proven to prevent tampering.

“A big one that we like is called our thermochromic ink, and that’s where you see the red key on the front,” Dorsten said. “What happens is when you try to copy a check with that, the ink actually fades with the heat of the copier, so if you get a check with no key on it where it says there should be a red key, that’s one major thing that helps, and it’s something that customers can physically test themselves. If you rub your finger over the key, it will disappear.”

“The one big thing that people forget is when they’re printing checks, they are printing money, so one of the things that is a security feature that is in our toner that you would print checks with, a MICR toner, is a red dye that prevents tampering and alteration,” Campbell added. “So if a fraudster were to take and try to chemically wash the check, then our toner will release a red dye that will void the check. And they can’t reprint it and they can’t take it to a bank and cash it. ... It’s overt, they can see it, whereas the toner—the red additive that’s in there—is a covert solution, so pairing the two together kind of helps to deter fraud.”

In addition, there are steps that distributors can encourage end-buyers to take on their end to maintain security. DFS, which also offers privacy stamps and check-writing pens, suggested printing checks with a thick, bold font.

“Crooks will use a pin to pick off individual dots on a thin font and overprint, using a thicker font, so the damage to the check paper isn’t as noticeable,” Carrington said.

Concerns with checks being stolen from the office or the mail causes TROY Group to recommend a blank stock—checks without the MICR banking information printed on them—to reduce the chance that companies’ banking information gets into the hands of thieves.

“That pre-printed MICR line—that’s what they want because that has all the banking information,” Campbell said. “That’s what makes it highly valuable. If you have blank check stock, and you’re printing the banking and the routing number at the time of issue, then that blank check stock is nothing more than just paper. It holds no value.”

For distributors overwhelmed by all of the aspects that need to be considered, Carrington, who noted 14.5 billion checks were written in 2018, has some encouragement. After all, it is the suppliers’ responsibility to keep up to date on all of the regulations and cutting-edge security technology.

“The most common misconception we hear is that ‘Checks are difficult to sell. I need to know so much about software and MICR encoding that it’s just not worth the effort,’” he said. “In reality, nothing could be further from the truth. Pick up the phone or email DFS, and our knowledgeable team will guide you through the process quickly and easily.”

The opioid epidemic has influenced the prescription market, Wenz said, resulting in some states mandating increased security regulations and a movement toward electronic prescribing, specifically for Schedule II drugs—those with a high potential for abuse, such as Adderall, methadone and oxycodone. 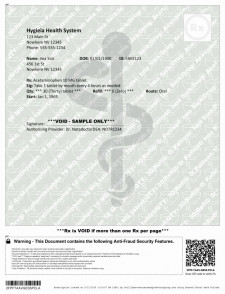 The state of New York transitioned to an entirely e-prescribing system with a few exceptions in 2016, and Wenz expects more states to follow, but with New York end-buyers still seeking prescription pads, she doesn’t foresee smaller offices or soon-to-be-retired doctors investing in the software needed for e-prescribing. And, overall, sales haven’t waned in the face of e-prescribing, Wenz said, noting a trend in e-prescribing California offices purchasing pads in smaller quantities as a backup in case of power outages or system hackings.

While many of the security features align with checks, scripts offer their own safeguards to prevent falsified versions with increased quantities that allow a patient to take higher doses or sell excess quantities, Wenz shared. Some states have layered security with aspects like numbering and barcoding to better track scripts and prevent duplicate uses—both of which California enacted, effective this year.

“[Pharmacies] can scan it and make sure the numbers aren’t being entered incorrectly into their system because they track what script from what doctor and what quantity for what patient,” Wenz said. “That’s a big push. Everybody’s on a list, so they know you’re not seeing multiple doctors in town and getting the same prescription.”

Campbell backed up the need for paper scripts by citing about 20 percent to 30 percent are printed in states where it is still permitted. As opposed to prescription pads, TROY Group offers a software solution that prints secure documents on plain copy paper with a standard printer.

“So it holds zero value, so if you were to go to a doctor’s office and they had one of those pads just laying about and someone would just take it—huge theft risk,” she explained. “Our solution prints on plain copy paper. It’s not special paper. It’s not thermal paper. It is nothing more than white copy paper.”

Aside from eliminating the theft risk, TROY Group’s paper scripts offer a unique set of printed layered security, like variable watermarks that repeat the script data, and micro print that blurs when copied and is visible only via a magnifier. It also resolves an age-old issue with scripts—legibility.

“It’s easier to read because it’s been printed—it’s not handwritten,” Campbell said. “I know that that’s been an issue. Then you get the pharmacies calling the doctor’s office because they can’t read the handwriting, so this helps eliminate this, too. So, it’s not just a security risk; it’s about efficiency as well.”

However, to combat a potential loss in sales down the road, Wenz has been searching for other opportunities and trends in the health care market. She’s pushed the importance of security features for
veterinarian clients’ script needs after hearing about owners using their pet as a means to get drugs they were unable to obtain from their own doctors, among other ideas.

“Obviously, our customers are wanting the same thing that we are—they’re not wanting to lose business,” Wenz said. “So whenever I see a lot of the same thing coming in, so like excuse notes from the doctor—whether you need it for school or work—that was something I pushed out a couple years ago. ‘Hey, if they need this when they’re writing controlled-substance scripts, do they need notes for that?’ And then all last year, a lot of the new business was the eyewear prescriptions, so I’m just passing that [information] along.”

Vital records may not be on a distributor’s radar, but Campbell said they should be. These birth, marriage and death certificates provided by state and local government offices could have some big security issues that distributors can resolve. Although, like scripts, vital document requirements differ among states. She insisted the paper stock and printer access need to be under lock and key to restrict unauthorized users, as, oftentimes, counterfeit vital records are used for organized crime, possibly allowing beneficiaries to obtain a passport that yields travel otherwise not accessible or positioning those in human trafficking rings as legal citizens. 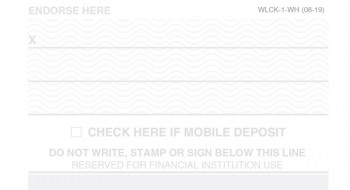 “We’re seeing more fraud out there again than these offices are willing to admit, so they’re keeping it very hush-hush, but when we start talking to them, they do tend to open up,” she said. “And it’s almost an easy sell for us because they recognize that they do need a more secure solution.”

As with all the security product categories, Campbell highly recommended using TROY Group as a subject matter expert. Whether it’s providing knowledge to the distributor or helping to make the pitch to the end-buyer, the supplier can walk clients through the process to find the best solution, including the equipment needed to print vital records. While the supplier has been in the vital records business for more than a decade, this new solution just launched in late 2019 and is not yet available to distributors.

“We welcome the opportunity to work with distributors on it, though, because a lot of times they have those government relationships and they can bring us on board,” Campbell said. “... We would ask questions about [the client’s] software, things like that, to get an understanding of how it works and then we would recommend something that would work for their workflow.”

Catch It If You Can: Examining the Impact of Fraud On the Checks Market