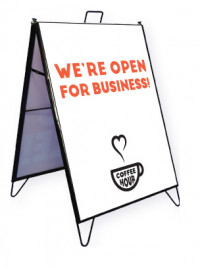 Due to a shortage of Signicade A-frames, Metal A-frames have become a popular substitute at National Banner Company.

As businesses scramble to reopen, signage has played a major role in helping them to announce their reopening and various COVID-19-related safety messaging, and with some schools returning to in-person instruction, the heightened demand for coronavirus safety signage isn’t expected to waver anytime soon. However, those in search of Signicade A-frames may find them out of stock or backordered for weeks or more with industry printers, as Signicade’s manufacturer, Plasticade, catches up with demand.

“We’re being told current delivery to replenish our inventory is some time in September,” Brandon Westmoreland, promotional signage sales manager at Dallas-based National Banner Company, said. “Most customers aren’t willing to wait that long and have chosen to go with one of our other options.”

Those options include metal A-frames and swing signs mainly, but spring and gator-base signs have been in the mix as well. These all come at lower price points but without the well-known brand name, which likely accounts for its demand in the industry, Westmoreland noted. However, the other sign frames are still durable and appropriate for outdoor use.

“The metal A-frame is the closest product we have to Signicade and the most popular one," Westmoreland said. "Like the Signicade, it’s an A-frame that holds two signs back to back.”

“Because our business has summer seasonality, it’s normal for us to build inventory in the winter to get a running start on summer,” he said. “This year, even though our sign frame factory was running 24/7, the market demand depleted our winter build earlier than normal.”

The COVID-19 pandemic created a surge in demand for sidewalk signs, specifically Signicade A-frames, like this one from National Banner Company.

Since the company was classified as essential, it remained open during its state shelter-in-place order, but in the first few months understaffing due to the pandemic may have contributed to decreased production, Foy admitted. However, it was a sacrifice he was willing to make until the company put a variety of protective measures in place to allow it to return safely to full staffing levels. Additionally, the company is increasing production by moving forward with an already planned multimillion-dollar expansion that will add a new production line later this month. And due directly to the unforeseen demand, the company rushed the creation of more molds, which typically have an eight- to 12-week turnaround, but were completed within a few months instead.

“We expect our customers to start seeing relief by the end of August, and we expect to see demand returning to normal levels by end of this year,” Foy said.

In the meantime, Foy encourages the sale of Plasticade’s other sign frames and stands or its traffic safety barricades repurposed for crowd control and social distancing barriers.

“I think we’ve done a good job of working with our [customers] to point them to products that are in stock, in the short term,” Foy said. “If product A isn’t immediately available, would product B be a suitable alternative? Our [customers] have been extremely nimble and creative in working with us to juggle short-term and long-term availabilities.

“... We continue to hold ourselves accountable to meet demands of the customer base that has trusted us for decades,” he concluded.