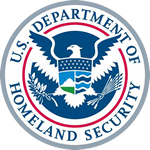 For the third consecutive year, labels/tags finished ninth on the list—just short of computers/accessories. According to the report, the agencies seized 572 shipments of labels/tags (2 percent of all seizures)—22 additional shipments compared to 2015 results. The value of those shipments, however, was $17,052,517. To provide some perspective, 2015 labels/tags shipments were priced at $33,335,825. 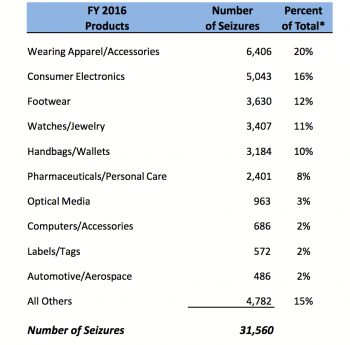 Overall, the numbers don’t appear to be headed in the right direction, with increases across six out of the nine categories listed. The “lucky three” were: 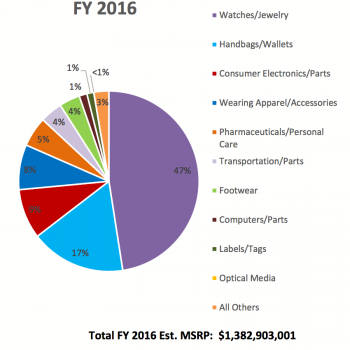 It should perhaps come as no surprise that wearing apparel/accessories once again topped the list of counterfeit commodities with 6,406 seizures. While the amount of seizures is higher than 2015 reports (6,232 seizures), it is important to note that this accounts for just 20 percent of all seizures, a 2 percent drop from previous reports.

Also of interest, automotive/aerospace debuted on the 2016 list, with 486 seizures. Meanwhile, the toys category was absent this time around. Other counterfeit commodities included: footwear, watches/jewelry, handbags/wallets and pharmaceuticals/personal care.

*Total estimated manufacturer’s suggested retail price of the seized goods had they been genuine.