A Look Into the Huge Shakeups in the International Shipping Industry 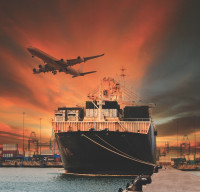 Last September, a Hanjin Shipping Co. Ltd. cargo ship was bound for the U.S. The problem was that Hanjin, based in South Korea, had just declared bankruptcy. So, that U.S.-bound ship was quite literally floating in limbo off the coast of California, unable to dock at ports.

One month later, the ships were able to find harbor, but the cargo onboard created massive backups for West Coast ports, like the Port of Oakland. In October, the San Francisco Business Times reported that the Port of Oakland was left with approximately 900 empty containers from Hanjin ships, and was expecting 300 to 400 more before the South Korean company stopped bringing cargo to the port.

This was all because Hanjin had gone bankrupt, and without a clear path forward, it left the business, as well as the cargo, in jeopardy. If you ask Cho Yang-ho, chairman of Hanjin, why the company had gone bankrupt, he would have told you that it was because the relatively small company simply could not compete with the larger, state-backed shipping companies.

These gigantic, sometimes government-backed companies have been able to form something of a monopoly in the international shipping world, particularly in Asia.

Not long after Hanjin declared bankruptcy, China Ocean Shipping Co. (COSCO) formed a partnership with China Shipping Group Co., according to an October article published in China Topix. Through this partnership, the two would combine 11 of their shipping yards.

As the shipping industry navigated its way through record-low growth, COSCO purchased even more shipping businesses, like Shipping Haisheng and Hainan Haisheng Shipping. This was largely due to China’s communist government wanting to reform state-owned enterprise.

NPR reported that 2016 was a particularly bad year for the shipping industry, and Chinese companies like COSCO, and, by extension, the government, wanted to seek higher profits.

“At a difficult moment of the cycle, consolidation is obviously a way for these players to gain greater market share and greater strength toward the customers.”

In that same article, CNBC reported that Drewry, a London-based shipping consultancy, estimated that the container shipping industry is on track for another three years of overcapacity and financial troubles because of the slowing global trade.

So, naturally, companies had to adapt to that, too. And they did that by building bigger ships.

On Dec. 26, 2015, the CMA CGM Benjamin Franklin “megaship” arrived at the Port of Los Angeles. According to a report in the Los Angeles Times, the ship was able to carry 33 percent more cargo than the largest ships currently at the port. It had arrived from its first trip from China and South Korea.

In 2015, that same Drewry reported that 1.6 million 20-foot equivalent units of shipping capacity were added to the global shipping container fleet. That equals a containers shipping growth rate of 7.7 percent in terms of volume. According to The Wall Street Journal, these megaships are 40 percent bigger than the largest ships were in 2006.

With the advent of larger ships making their way through international waters, the scientific community, particularly environmental scientists, are looking into how the current shipping climate impacts the global ecosystem.

A team of scientists in the Pacific Northwest and the U.K. found that shipping volume in the Salish Sea in British Columbia could be detrimental to the local orca population. Specifically, it’s the noise generated by the ships that interfere with the orca’s lives. Lance Barrett-Lennard, head of the Vancouver Aquarium’s cetacean research program, told the CBC in April that the shipping noise acted as sort of “acoustic smog.”

“And every ship that goes by absolutely fills their world with noise,” he said.

Think of it this way: The same way humans use their sight for pretty much everything in their lives, orcas rely on sound. When the sound interferes with them, it inhibits their ability to navigate, communicate and hunt.

The Bellingham Herald reported that the team of scientists implored Canadian Prime Minister Justin Trudeau to reduce shipping noise by three decibels over the next 10 years, and 10 decibels within the next 30 years. This would require government-mandated speed limits.

Government involvement in international trade hasn’t been limited to protecting wildlife, mind you. Stateside, we saw big shakeups in our own international policy. After Donald Trump was elected as the 45th President of the United States, he quickly made good on his campaign promise to pull the U.S. from the Trans-Pacific Partnership (TPP), the trade agreement that would have paired the U.S. with Pacific Rim nations, like Vietnam, Malaysia and Singapore.

Had Congress ratified the U.S.’s involvement in the TPP, it would have set up what the BBC called in January “a new single market trade system, similarly to how the European Union work.” Furthermore, the group would account for approximately 40 percent of the world’s trade.

This would especially have been an economic boon for countries like Malaysia and Vietnam, which have been exporting heavily to Western countries.

Aside from the decision to pull out of the TPP, which will turn the focus more toward domestic manufacturing and away from importing, President Trump voiced his distrust in the Korea Free Trade Agreement. Commonly referred to as Korus, the 5-year-old deal is due for a review period. During that time, the president wants to “either terminate or negotiate” the deal, he told The Washington Post.

However, South Korea’s Trade Ministry said in that same article from April that it has no plans to renegotiate the agreement.

During his trip to the Korean Peninsula in April, Vice President Mike Pence told business leaders in Seoul that the U.S. hoped to “reform” the agreement to combat “barriers to entry” that create an unfair advantage against American workers.

With consolidation swallowing companies without government money in Asia, shaky international trade agreements and teams of scientists warning of potential environmental disasters related to freight shipping, the next few years will be an interesting time for international shipping.

What to Know About the Vaccine Mandate & OSHA ETS

President Biden’s ‘Path Out of the Pandemic’ Plan