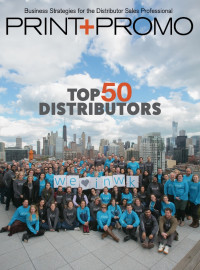 It can be hard out there for a distributor. The migration to online shopping has allowed end-users to easily bypass the middle man (or woman). The threat of direct selling remains very real. And, let’s be honest, is there anything Amazon can’t do?

Despite the challenges facing distributors, they manage to persevere by selling into new revenue-generating buckets, executing a vision and mastering the art of consultation. In October, Print+Promo detailed trade printers’ total annual revenue for the last completed fiscal year. Numbers came in at $2.36 billion, short of 2016’s $2.57 billion—a decline best explained by business paralysis resulting from economic and political uncertainties.

The distributors, however, did not share the same fate as their supply-chain partners. Want further proof? Take a look at our just-released 2017 Top 50 Distributors list, the annual ranking that recognizes the industry’s highest-performing distributors based on revenue.

The top three looked as expected, with Chicago-based InnerWorkings Inc. leading the pack again at $1.09 billion in sales. Cleveland-based Proforma reported $492.0 million, compared to 2016’s $532.8 million, but it still was enough for the Greg-and-Vera-Muzzillo-led company to clinch second place. Glenwood, Minnesota-based American Solutions for Business enjoyed a boost in revenue, with its final tally reaching $267.4 million—a departure from 2016’s $242.7 million.

As for the rest of the top five, surprises abounded, starting with the debut of Discount Mugs. This is the first time the Medley, Florida-based promotional products distributor has participated in our rankings, and with a number like $198.5 million, the company coasted into the No. 4 spot. Because of that, Wayland, Massachusetts-based iPROMOTEu took fifth place with $157.8 million.

Mergers and acquisitions (M&As) caused additional shake-ups. New York-based Smart Source LLC continued to benefit from its January 2016 acquisition of Duluth, Georgia-based Data Supplies Inc. The firm made $120.6 million—a $5 million-plus increase from 2016 figures. Our readers also may have noticed our No. 19-ranked distributor, Brand Advantage Group Inc. The Plymouth, Minnesota-based Safeguard company is the product of the 2016 merging of QBF – Solutions Beyond Print and Team MHC, two top 50 Minnesota-based distributors that Safeguard Business Systems acquired in July and November 2014, respectively.

The list, which serves as a barometer for industry health, offers insight into how external factors, like M&As, the economy and political climate, influence print volume among print resellers. For our 2017 Top 50 Distributors list, we evaluated more than 70 companies, totaling $3.50 billion—the distributor segment’s best showing since 2008. We also asked distributors to report how much business they do in major product categories, including printed forms, labels & tags, commercial printing, direct mail, promotional products and more.

Here are some key findings:

Want to see how everyone fared? Click here for the full 2017 Top 50 Distributors list. There, you will find bonus information, like Print+Promo’s in-depth analysis; top 10 rankings for four leading product categories; and interviews with principal officers from five of our top 10 distributors.