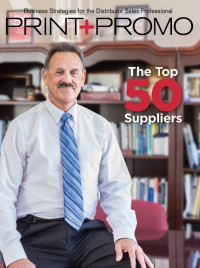 When economic uncertainty lingers, so too does the perception that corporations have no option but to operate blindly. As a result of this business paralysis, confidence is undermined, and significant investments—whether in people or equipment—are stalled.

But if there’s one thing we’ve learned, it’s that you can’t stop change. From key acquisitions to a new administration in Washington, the print industry saw plenty of activity in 2016. So much is happening that it’s hard to say with confidence what’s ahead. We do, however, have a clearer picture of financials for the most recent fiscal year thanks to our just-released 2017 Top 50 Suppliers list, the annual ranking that recognizes the industry’s highest-performing trade printers based on print revenue.

Sales for the trade printer segment fell short of last year’s $2.57 billion, finishing at $2.36 billion. While we can’t make any sweeping conclusions based on this information, we do have some theories, starting with the returning champion, Ennis Inc. The Midlothian, Texas-based supplier managed to hold on to the No. 1 spot, earning $356.9 million. Compare that to Print+Promo’s 2016 chart, where Ennis Inc. was listed at $569.0 million and, at quick glance, it looks alarming. Except, it’s not.

Last year, the company shed its Alstyle Apparel division, which accounted for a majority of Ennis Inc.’s promotional product sales. If you exclude the discontinued operations of Alstyle Apparel and refer to the supplier’s annual report, sales through Feb. 28, 2016 (the end of Ennis Inc.’s fiscal year), finished at $385.9 million. That doesn’t mean the company hasn’t stayed busy. You may remember that Ennis Inc. acquired another prior top 50 supplier, Independent Printing Company, in January 2017.

It also is important to note that the financial information for a few 2016 heavyweights, including ABnote USA Inc., Performance POP, Joseph Merritt & Company Inc. and John S. Swift Co. Inc., was not made available prior to press time.

4over Inc., Glendale, Calif., and OneTouchPoint, Hartland, Wis., held on to spots two and three, respectively. Magnets 4 media, Washington, Mo., and Western States Envelope & Label, Butler, Wis., rounded out the top five again, but there was a catch. Magnets 4 media’s $4.36 million-increase in sales (putting it at $113.3 million) was enough to bump the trade printer to No. 4.

Not only does the Top 50 Suppliers list offer a glimpse into industry health, it gives print manufacturers a chance to gauge where they stand among their peers. In addition to reporting annual sales totals, suppliers were asked to report how much business they do in major product categories, including printed forms, labels & tags, commercial printing, direct mail, promotional products and more.

Here are some key findings:

Want to see how everyone fared? Click here for the full 2017 Top 50 Suppliers list. There, you will find bonus information, like Print+Promo’s in-depth analysis; top 10 rankings for four leading product categories; and interviews with principal officers from six of our top 10 suppliers.

2021 Top Suppliers: How alphabroder | Prime Line Took the No. 1 Spot

2021 Top Suppliers: What We Know So Far
Comments
Subscribe
The Top 50