The Land of Opportunity

A look into the state of U.S. manufacturing and how it affects the print and promotional industry

According to Global Trade, the U.S. manufacturing sector expanded in March for the first time in six months, while the overall economy grew for the 82nd consecutive month. Twelve out of 18 manufacturing industries reported sector growth, and 13 industries reported an increase in new orders in March. These are encouraging numbers for print and promotional companies that manufacture in the U.S., as many U.S. consumers are looking to source their products from local companies.

Print+Promo spoke to Amberlea Barnes, CEO of Stuttgart, Arkansas-based Drum-Line; and Michelle Stiles, vice president of operations at Plymouth, Massachusetts-based Americanna Company, about the state of U.S. manufacturing, the Trans-Pacific Partnership’s impact and how distributors can benefit.

It’s Helping Out the Home Front
Barnes said that while many promotional products suppliers source products from overseas and decorate locally, demand has grown for U.S.-made products. “We are slowly seeing a renewed interest in USA-made products,” Barnes remarked. “I think Americans are beginning to see that sourcing overseas has driven jobs out of our country and increased safety concerns. Manufacturing in the U.S. is making a comeback, and consumers are more aware that their purchases matter. Promotional products distributors are in a unique position to drive business to U.S. manufacturers, as companies of all sizes look to distributors for expertise and trust in sourcing products.” 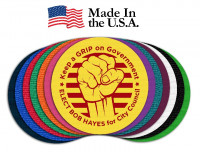 Stiles also has observed an increased demand for U.S.-made products. “Sourcing U.S.-made products and materials is still a challenge, but there has been a significant increase in the request for U.S.-made only,” she said. “I definitely see the trend toward U.S.-made [growing]. Providing Americans with solid, full-time employment with benefits is key to preserving the dwindling middle class in this country.”

It’s Helping Out the Customer
Creating jobs isn’t the only benefit of domestic manufacturing. From a business standpoint, sourcing products from the U.S. allows suppliers and distributors to stay on top of inventory and provide a faster, and more reliable, turnaround to clients. “Since we make products at the time of order, inventory shortages are not a problem,” Barnes said. “We can turn orders faster, more reliably and without the safety concerns of direct importing. Minimum order quantities for custom products are lower than imports, as well.”

Stiles agreed, noting that Americanna Company is better equipped to meet time-sensitive needs when sourcing locally. “[Working with] U.S.-made [products] provides a quick turnaround time and allows us the flexibility to fulfill custom requests in a speedy manner,” she said. “[That is] very important in a deadline-driven industry.”

Should We Be Afraid of the Trans-PacificPartnership?
As the cost of production in China rises, many companies, like Wal-Mart, Whirlpool and Otis Elevator, have turned their attention to U.S. manufacturing. However, some people fear the Trans-Pacific Partnership, an agreement that reduces trade barriers between the U.S. and 11 Pacific Rim nations, including Japan, Vietnam and Malaysia, will end any progress the U.S. manufacturing sector recently has made.

The Atlantic reported in October that economists, such as Alan Greenspan and Ben Bernanke, believe that the partnership will focus on providing U.S. consumers access to cheaper goods, rather than focusing on creating manufacturing clout in the U.S. itself. 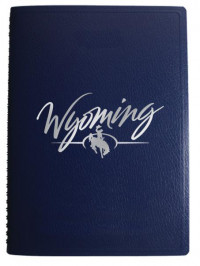 Drum-Line has been manufacturing products in the U.S. for more than 80 years. Pictured here is its Flex Journal.

Barnes has a more positive outlook—especially in regard to the legislation’s effect on the industry. While some have warned of negative repercussions, Barnes felt that the changes in trade barriers would allow for Asian consumers to have better access to U.S.-made goods. “While there might be some increase in exports by U.S. manufacturing due to the Trans-Pacific Partnership, I don’t expect it to have a significant impact on the promotional product industry,” she commented. “Eliminating expensive tariffs and expediting customs processing will make it easier for international companies to choose U.S.-made products for all divisions.”

Creating a Safer Work Environment and Industry
By providing American-made items, distributors are able to guarantee their products are made ethically and safely. In February, the U.S. Senate voted to close a loophole in the Tariff Act of 1930, which prohibits importing goods made by convict, forced or indentured labor. This allowed U.S. Customs and Border Protection (CPB) the power to seize shipments that officials suspected came from forced labor. But, Yahoo News reported in February that from the legislation’s genesis to 2016, CPB only had done so 39 times. This made it entirely possible for goods sourced from child or slave labor to slip through the cracks and into the U.S.

By sourcing locally, distributors can show potential clients that workers receiving appropriate wages make their products ethically. “I can’t speak for all U.S. manufacturers, but we are a turn-key operation, which gives us complete control over quality and safety,” Barnes noted. “In our Arkansas facility, we manufacture nearly 500 different styles of journals, notebooks, memo pads, calendars and planners.”

Barnes added that by making all of these items in-house, the company not only controls the ethics of manufacturing, it can control quality first-hand, ensuring that customers receive exactly what they ask for. “From order processing to artwork prep, printing, bindery and packaging, every step of the order happens here,” she said.

“Account managers communicate client needs directly to production staff and can actually walk through the factory to make sure an order is going as planned.”