Thinking Outside the Plant

How to creatively sell pressure seal

If Print+Promo’s 2016 State of the Industry report is any indication of what’s to come, the industry could be facing a few challenges. It’s not the best news, but if we’ve learned one thing in the ongoing aftermath of the recession, it’s that we write our own success stories. Yes, print tracks with the overall economy. Yes, the economy is prone to frequent mood swings. And, yes, there are companies that fall far short of performance expectations during a recovery period.

The remaining players, however, are finding new ways to grow, in addition to rediscovering old ways. Some printers are even growing in what many traditionally perceive as slow-growth sectors, like printed forms. In fact, just last year, our top 50 suppliers reported $486.8 million in forms sales, up from 2014’s $475.7 million. What contributed to that boost? Pressure seal forms. “While we continue to read and hear that the heyday of pressure seal forms and equipment is in the past, our sales over the past five years tell us otherwise,” remarked Art Waganheim, vice president of operations, Paitec USA, Davie, Fla. “The key to that success is having great resellers who think outside of the box and find plenty of new types of applications for pressure seal technology.”

That’s not to say prospects are going to share the same enthusiasm from the get-go. Despite distributors’ best efforts, pressure seal talk often turns to costly investments, paper jams and process changes. By communicating the right information to the right people, you, the trusted reseller, can exceed industry expectations. Read on as our experts address common objections that can be encountered in the pressure seal market.

Objection No. 1: Change is too disruptive. I’d prefer to stick with my trusty envelope inserter.
Whether out of reluctance or fear, many prospects aren’t ready to enter a world of cohesive products and EZ-folds. Eliminate their concerns by focusing on long-term benefits, starting with efficiency. “For small mailings of a few thousand pieces, pressure seal has inexpensive equipment that processes the mailing in less than an hour, so employees can be back to doing their primary duties quickly,” said David Yost, general manager of InfoSeal, Roanoke, Va. “For large users, we have developed a 2-wide solution, which runs at speeds up to 80M letter-size forms per hour.” Just last summer, InfoSeal installed the first 2-wide unit in the country for a client that had to process large quantities of forms in a short turnaround, according to Yost.

Savings on material costs and labor are other benefits. Pressure seal forms are stand-alone mailers, whereas traditional envelope-inserted mail requires both the envelope and the form that is being sent within it. Pressure sealers cut out an extra document that then needs to be folded and stuffed into envelopes, along with the added step of ordering and stocking separate envelopes.

Paitec USA’s inline solutions reduce labor costs further by removing the need for manual handling of printed documents from the exit tray of the printer into the feed table of the machine. “Instead, the printed forms go directly into our inline machines and only need to be handled once folded and sealed,” Waganheim said.

Objection No. 2: That’s great for others, but I don’t know that it’s the right move for my company.
Waganheim encouraged dealers to conduct a little research. Find out which of the prospect’s mailings are typically single-page only. If the answer is “all of them,” pressure seal is worth considering. Some machines are better equipped for low-volume mailers processing less than 500 forms per day; others are more suitable for larger runs (think a million forms per month), Waganheim noted. “It is important that dealers and distributors focus on the typical batch volumes and not just the monthly volumes since there are many customers doing low monthly volumes, but process them over a few days only making the daily batch volumes high,” he stressed. “We have seen many cases when resellers leave money on the table by underselling the machine based on just monthly volumes.”

Joel Wynne, director of marketing and strategic sales for Dayton, Ohio-based Wilmer, agreed, adding that his company offers PSMailers with speeds ranging from 1,800 per hour to 10,000 per hour. The company has even made an online tool (www.psmailers.com/select-your-model) available for distributors and their clients to help determine which unit is most appropriate for their bottom lines. From there, clients can download a PDF or Excel spreadsheet of Wilmer’s “Fact Finder and Cost Justification Worksheet.” “The online tool is [also] available on our generic PSMailers website, www.psmailers.com,” Wynne said. “Distributors can utilize or add this link to their own websites.”

Bringing sample designs to client visits has served InfoSeal’s distributor partners well. “Many clients are surprised at the creative layouts that make an attractive communication piece when they did not think pressure seal was even a possibility,” Yost said. “One solution that surprises customers is the use of an integrated return envelope into a pressure seal document.”

Objection No. 3: You’ve got my attention, but I think I want to try another gluing system first.
Not only is pressure seal clean, it’s flexible. As Yost mentioned, pressure seal supports everything from the most basic product to tax forms with options, including the 14" eccentric Z fold. “We hear comments from customers that have tried other gluing systems, which are challenging once production actually starts,” Yost said. “Getting a glue system going on a small mailing is unrealistic. Likewise, we have heard from many prospects and clients on large applications that have tried gluing systems rather than pressure seal, and have struggled continuously and regret  the decision.”

Objection No. 4: I like having options, but I’m concerned about maintenance. 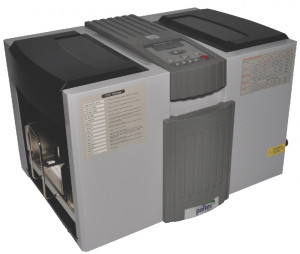 It’s true that pressure sealers aren’t without challenges—toner build-up on the feed and fold and seal rollers of the machines can cause misfeeds and jams. Fortunately, regular preventive maintenance for this type of machinery is no worse than other printers. “We recommend the rollers be cleaned in a schedule consistent with the volume of forms being processed,” Waganheim said. “The end-users should be able to do the cleanings themselves, although, depending on the machine, there may be some rollers that require covers to be removed, which may be more appropriate for a technician to handle.”

Waganheim also warned of potential problems from overheating. “Although pressure seal equipment does not use heat to seal the forms, the machines do have metal seal rollers that will expand and get hot, causing the gap between them to tighten, thus slowing down the machine to the detriment of some of the gears and pulleys,” he said.

Operators should give the metal rollers enough time to cool off after extended runs. “With proper attention to the condition of the seal rollers, operators should be able to easily hit or exceed daily recommended volumes with little or no downtime,” Waganheim added.

Objection No. 5: I’ve heard that the forms have their own set of problems ...
Unlike most forms, pressure seal forms rely on fold perforations to ensure that the dry cohesive glue marks properly align for sealing, Waganheim explained. “We have seen many cases where the perfs are not uniformly cut across the form, are the wrong type of perforation or they have even been punched the wrong direction, making folding very difficult,” he said.

To avoid these types of problems, Waganheim continued, distributors or end-users should spot-check each new batch of forms to see that perforations are correctly cut and aligned.

Then, there’s the issue of heat-related curling, which can cause feeding issues if the operator does not manually roll the corners to flatten them out. “All laser-printed documents tend to have some level of curling,” Wynne observed. “How badly is determined by many factors (e.g., laser printer type and manufacturer, paper weights, processing environment, etc.), but is rarely something that can’t be overcome by taking advantage of our support staff and onsite service providers.”

Objection No. 6: Pressure seal forms just don’t seem very exciting.
Not true. Some manufacturers are getting creative with folds. “[This enables] some to have the appearance of an insert or door panel,” Waganheim said. “These unique attributes do increase the flexibility of pressure seal technology to go beyond typical applications into new marketing mailer opportunities.”

InfoSeal is one company that is developing new solutions for direct mail. “Recently, we created a scratch-off product that allows the user to control the hidden number below the scratch-off and the name at the same time,” Yost said. “This product is being well received.

“In first-class mail, we recently created tax forms that allowed the new 1095-C and W-2 to be imaged and mailed at the same time, saving customers many thousands of dollars of postage,” he continued. “The regional sales managers’ interactions with the distributor is a key strategy to our growth and continued development.”

Objection No. 7: I’m wowed by your awesome selling skills, but I’ve been let down by other distributors, so ...
There are different ways distributors can ease the transition to pressure seal. Wilmer offers a toll-free number that customers can call to get answers to their troubleshooting and maintenance questions. “[Distributors] can offer on-site installation and service,” Wynne said. “Also, the distributors can use their Wilmer representative as a resource.”

“We offer a complete solution including forms, equipment and service for total responsibility,” Yost added. “Our call center is staffed by technical support agents rather than just being a message center. Often, a few pointers from this staff have customers up and running within a few moments.”

Paper Covers Rock, But Where Is the Paper? Jumbo Roll Specialists Get Candid About Their Current Reality

Print+Promo Marketing 2021 State of the Industry Report: The Role of Printed Forms In a Post-Pandemic World
Comments
Subscribe
The Top 50