In our annual Women in Print feature in the May issue of Print+Promo, we highlighted the challenges of being a woman in a traditionally male-dominated industry. The same holds true for the manufacturing divisions at print plants, which is why two Ennis plant managers are deserving of our attention. At this year’s Ennis manager’s meeting, Debi Van Handel and Roblyn Beltran were presented with “Most Improved Plant” awards—a feat that can be obtained only through hard work and above-and-beyond management skills.

Beltran explained how the awards were selected and the significance of the accolade.

“Each of the three business unit directors chooses a plant to offer this to, and the reason that they explained why we were given this award was because we made it through [our] consolidations so smoothly and seamlessly without being a detriment to our customers,” said Beltran. “They’ve seen a lot of consolidations, and they’re difficult to navigate without having your customers feel the effects. ... It was quite an honor. It felt really good to be recognized in front of this room, especially being my first year at this particular meeting.”

To get to this point in their careers took a lot of dedication from both women. We interviewed Handel and Beltran, and talked about their backgrounds in the manufacturing industry, as well as the sources of their business success. 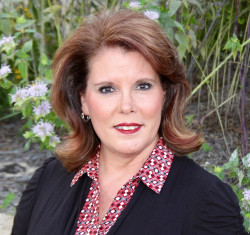 Debi Van Handel began her printing career through a reluctant meeting with a sales manager at a local printing company. At the time, Van Handel had been working in management for a large, specialty women’s retailer—an experience she loved because it revolved around relationship-building and talking with new people every day. One of her regular clients was a sales manager for Menasha Corporation, and she had a strong feeling that Van Handel would make a great addition to the company’s sales staff. Eventually, Van Handel agreed to discuss shifting her career to the print world, and subsequently, she began selling stock HCFA forms for Menasha Corporation’s Neenah Printing division. She worked there for two years, learning the ins and outs of the industry. It was then that her same manager asked her to migrate over to the tags and labels division, and the rest is history.

Since 2000, Van Handel has worked for Special Service Partners (SSP) in the sales division. But when Ennis Inc. acquired SSP in 2015, Van Handel was eventually offered the role of general manager in 2017, which meant stepping outside of her comfort zone once again.

“Being honest, this was not a role I saw myself in,” she recalled. “Not because I didn’t think I could do it, but as I have with each role I’ve held, I loved my role as sales manager and I certainly never envisioned myself as a general manager with a large company. ... To say I was shocked and terrified would be a gross understatement, but I accepted the position because I felt that although I didn’t think I was ready (and maybe they weren’t entirely sure either), they truly believed in me, and I really felt they would be there to support me on every step of my journey.”

Throughout her time in the print world, Van Handel pointed to winning the “Most Improved Plant” award at the Ennis manager’s meeting as the “best career moment” for her because of “what it represented for the SSP family.” In the pre-Ennis days of SSP, Van Handel described a company culture where morale was not great and focus was lost in a very “operational” structure. As a result, the employees did not feel heard, and the effects were felt throughout the business and its customers.

“A big factor in accepting the role of general manager when Ennis offered it to me was to change the culture back to what it once was,” she said. “I wasn’t exactly sure how, but I started by talking to everyone and asking them for their support and trust as we navigated together. They [gave it to me], and I am fiercely proud of team SSP. To have people who have visited previously, stop at our plant and feel the difference in our culture and morale is a feeling I can’t describe.”

Van Handel’s achievements, in their own right, are impressive, but the fact that there’s only a handful of female general managers at Ennis speaks volumes as well. Van Handel stressed the fact that Ennis is very progressive when it comes to promoting female leadership—the issue is that there are not that many women in the manufacturing industry to promote. She described the early days of working in a predominantly male business as a learning experience, in which she needed to “develop a thicker skin, listen and learn from these people, while being respected and confident, and holding my own in any conversation.”

Her advice to other women in manufacturing is to stay true to who they are and what they believe in, and to be strong and confident, but not arrogant.

“That can be tough, as strong women are often perceived as arrogant or intimidating, especially those in management roles,” she admitted. “I feel like some of that stems from women trying to break old stereotypes, but we can shatter that glass ceiling by owning our roles and leading by example. If we believe we can or we can’t, we’re usually right.”

Van Handel lives in Wisconsin with her husband and family, and in her free time, she enjoys riding her Harley. She says she does her best thinking on her bike, and it’s a great conversation topic with the guys. 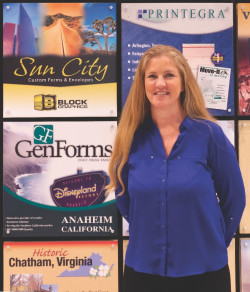 Roblyn Beltran began her manufacturing trajectory at 15 years old. A Block Graphics building was erected in her hometown of Romoland, Calif., and her mom suggested she put in an application. She began working as a plate burner a few months later, and continued to work full time during summers and part time during the school year until she graduated high school.

She married her high school sweetheart, who joined the Air Force, and the couple moved together to his station in Wyoming. There, she worked at a local commercial print shop, until the couple headed to his next station at an Italian airbase. The two started a family and moved back to Great Falls, Montana two years later. After a couple of years there, her husband was relocated to Korea, and Beltran decided to move back to California with her three-year-old daughter. After checking in with her “Block family,” the company enthusiastically offered her a job. Beltran was able to work at Block in short stints for the next 11 years while she traveled the world and even earned a Bachelor’s degree in management and computer information systems.

In 2007, the family permanently settled in California, and Beltran was offered the position of production manager at Block. In September 2018, after the consolidation of Printegra of California and GenForms into Block’s Sun City plant, her general manager retired, and she was promoted to that title.

When asked what her greatest career achievement was, Beltran said being promoted to general manager of the plant where she held her first job was at the top. She was also proud of the way the plant increased its profit margins, cleaned things up and smoothly consolidated through different acquisitions.

“I’ve seen a lot of consolidations really struggle and the customers really suffer for it, so I think we did really well, and we didn’t lose a lot of sales,” she said. “We were able to keep things seamless with the move, and then continue to actually really benefit from those consolidations in the years since.”

In terms of her managerial style, the idea of being a boss never appealed to Beltran. Instead, she considers herself more of a leader.

“My ego doesn’t desire that title [of boss],” she elaborated. “But to lead a team to be successful, and to be proud of their work and success, that’s always my goal.”

Throughout her time at Block, Beltran has witnessed firsthand the evolving landscape of women in manufacturing, and she points to Ennis as a leader in inclusivity. For her, the prospect of being one of the only women in the room at Ennis’ meetings was intimidating, but nothing she couldn’t handle.

“Once [the meeting] gets rolling, you realize that they’re listening to you just the same as they’re listening to any of the others in front of all the board members and executives,” she said. “They’re very respectful and treat you just the same—not any easier than the men. So, I think it’s definitely changing and evolving. It’s not the industry that it was even 10 years ago.”

In terms of advice for other women looking to break into the industry, Beltran simply stated that it wouldn’t be any different from advice she would offer to a man in the same position.

“It just comes down to work ethic and drive,” she said. “Continue to prove yourself just like any man would.”

Related story: Print+Promo 2019: A Celebration of the Women in Print and Promo

Hannah Abrams is the senior content editor for Promo Marketing. In her free time, she enjoys coming up with excuses to avoid exercise, visiting her hometown in Los Angeles and rallying for Leonardo DiCaprio to win his first second Academy Award.