Under 40: Jared Opper, Clothpromotions Plus 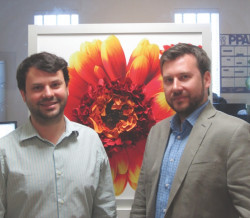 Clothpromotions Plus is a family-owned and operated company with a 20-year history of manufacturing domestically produced microfiber products. Under the leadership of brothers Jared and Scott Opper, the company has developed universally useful products, along with the proprietary technologies that produce them. But its story nearly took a different turn. As Jared Opper pointed out, all it takes is one good idea to spark a new future.

“I had been working with my dad, Norman Opper, at the family business,” the Florida State University graduate recalled. “Then, one day, my dad had an idea: Use our microfiber cloths as a marketing tool. I began to pursue the idea with him. After developing the product, the look, the feel, the scallop edge—that you now see everywhere—and the quality standards, we needed the right path to distribute them to market.”

The promotional products industry was the perfect avenue. The problem? It was unfamiliar territory for the Opper family, so they had to learn the inner workings of this niche community from scratch. In 2008, Jared, his now-wife and parents packed some samples, printed a banner, made a small catalog with this “new funny alphabet pricing that they still did not understand” and headed to Orlando to exhibit at the ASI show.

Scott Opper, an NYU graduate who, up until this time, had been working as a psychotherapist in New York developing citywide programs, later joined Jared to grow the business venture, and the two owners continue to fine-tune their marketing plan. Creating something valuable together as a family is not lost on these brothers.

Jared is still amazed at the success they celebrated during those early days. “Our company and my dad’s idea transformed how an item is viewed in the world,” he added. “A lot of people thought it was a fad. I would say, ‘We don’t do fads, this is the real thing.’”

Why he loves the industry: The wonderful, nice people. They encourage me to make us a better company.

Age roadblocks and advantages: Perception—being younger doesn’t mean I’m on Facebook or Instagram all day. I’m not too set in my ways yet.

His biggest career influence: My father, Norman Opper, Clothpromotions Plus. He always let me try new things and [showed me different] ways to do things. I still ask him things every week.

His most meaningful business accomplishment: [I’d say] creating an organization with a great group of people. Generating jobs in our country that did not exist [also generates].

His differentiating factor: Not following “best practices.” Who decided what is best for every business and every customer? Business models are meant to be broken and reinvented. If you don’t evolve, you fall.

What he does for fun: It’s all about family time.

Read the complete list of Print+Promo Under 40 honorees here.