When One Supplier’s Booth Didn’t Show Up for Expo, Its Team Got Creative (and Did Some Good)

When life gives you lemons, they say, make lemonade. But they never tell you what to do if staff shortages at a transportation company leave your lemons trapped on a truck 300 miles away with no one available to drive them to you on time for your event.

That’s the situation Raining Rose Inc., the promo supplier based in Cedar Rapids, Iowa, found itself in just before this year’s PPAI Expo. Only, it wasn’t lemons Raining Rose was waiting for—it was its brand new trade show booth. And the supplier got the bad news just days before the start of the show.

“We realized the booth was not going to make it in time for the first day of PPAI Expo on the Sunday before Expo,” says Lindsey Davis, MAS, director of promotional sales for Raining Rose. “A group of our team was out to dinner in Las Vegas and got the alert.”

Rather than letting the news ruin their dinner, though, the Raining Rose team jumped into action. They considered a few options—having a Phoenix-area team member rent a truck and drive the booth to Vegas, turning another team member’s camper van into a makeshift booth, etc.—but quickly realized their misfortune was actually an opportunity to do some good. 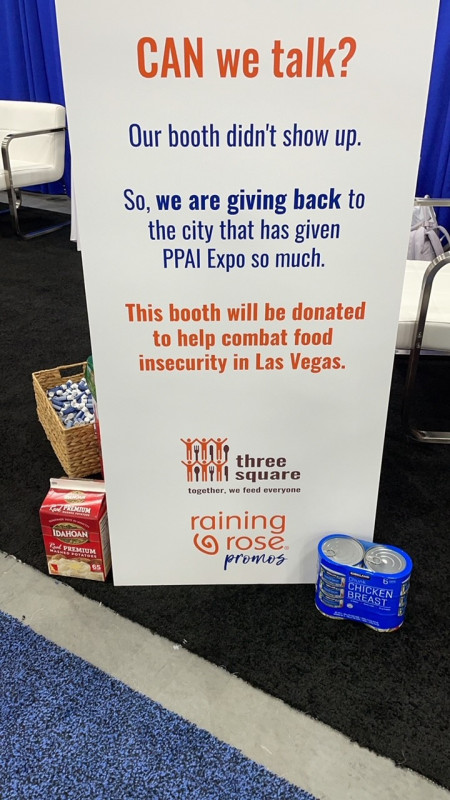 When Raining Rose found out days before PPAI Expo that its booth wouldn’t be delivered in time for the show, it assembled a makeshift booth using food and other items it could donate afterward.

With Raining Rose’s “People & Planet” core value in mind, the team decided to build a temporary booth from items it could donate after the show, rather than single-use materials that would just end up in the trash. After some quick searching, they found Three Square, a Las Vegas nonprofit and Southern Nevada’s only food bank, and assembled a shopping list based on its most-needed items.

The next morning, they got to work. A team deployed to Costco, stocking up on non-perishable food, personal hygiene items and baby products like diapers and wipes. With help from the Expo show floor staff, they loaded in their haul—some 80 bulk-sized items—and secured a storage area to hold it in until they could make the donation. All that was left were a few finishing touches, though even those came down to the wire.

“We knew we needed some kind of signage to pair with the piles of donation items so that people walking past our booth could see what was going on,” Davis says. “After what felt like a hundred calls, one local print shop was able to get the job done for us and have the signs delivered on Tuesday morning, just before the show started. Huge shout-out to King’s Printing in Las Vegas!”

When the show floor opened, Raining Rose’s modest DIY booth stood out. It didn’t have towering banners or fancy lighting, but the very absence of those trade-show staples caught people’s attention. And once curious attendees began stopping by, the story—and the good cause behind it—got them talking.

“The response was incredible,” says Davis. “We heard amazing comments from people who stopped by the booth and received some special shout-outs from industry leaders. We even had a handful of people stop by later in the week with donation items that we took with us to Three Square as part of the donation! The promo world is filled with good people with warm hearts—we saw this front and center throughout Expo week.”

By day two, Raining Rose’s original booth had arrived, giving the supplier a chance to showcase the second half of its People & Planet mission. A certified B-Corporation, the company uses sustainably sourced ingredients and recyclable packaging. It meets USDA standards for organic production, handling, processing and labeling. It even upcycles its water, each week sending 2,400 gallons of rinse-water from its manufacturing facility to a local facility that converts it (along with cattle manure) into electricity-generating methane gas. 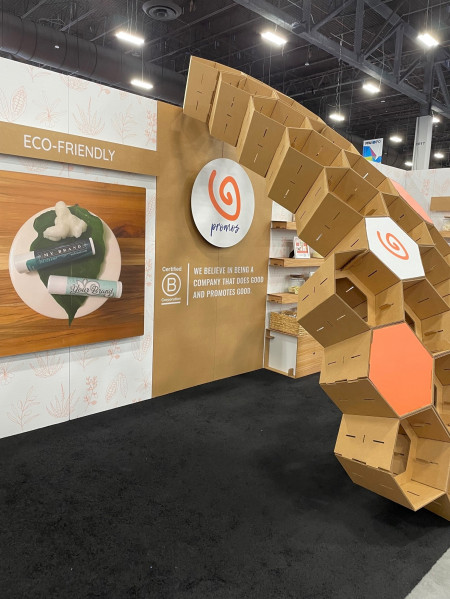 The booth, of course, was made entirely from recyclable cardboard, with displays highlighting Raining Rose’s ingredient stories—how, why and where it sources ingredients for its products. A cardboard honeycomb (a reference to the supplier’s use of beeswax in its products) arced from the floor to the rear booth wall. And the Raining Rose team handed out Sustainabalm, a new product made from sustainably and responsibly sourced materials, with packaging made from recycled post-consumer plastic and potato bio-resin.

Raining Rose is among the suppliers leading that shift. And its Expo experience highlights a few of the many ways industry companies are using their platforms and resources to be more than just sellers of product. By thinking quickly and staying true to its mission, the Raining Rose team turned a potentially sour situation into something sweet. With life handing out no shortage of lemons these days, that’s a good lesson for any business.

“I am very proud of our team for pivoting to do some good while dealing with an issue outside of our control,” says Davis. “Like everyone in the industry, we have been pivoting due to issues outside of our control since the start of the pandemic. This was 100% a team effort. Something like this would not be possible without our amazing team. I am immensely proud of everyone for coming together to support this vision and execute it perfectly.”

The Power of High Quality Media in E-Commerce

The Ex Factor: When Should You Break Up With a Customer?

Past and Future: 7 Promo Lessons From a Departing Industry Veteran