That’s one way to look at the impact technology has had on the print industry. Things have gone digital, and the demand for print has shrunk. How could anything get worse than that?

Let me offer you another viewpoint:

But wait, you think, that’s what you already said. You’re right. Nice catch. Nothing gets by you. What I’m offering isn’t a change in vocabulary; it’s a change in perspective.

There’s an argument to be made that the negative impacts of technology have already been felt. Traditional print models have been modified, yet many products still stand to gain. For example, within the world of laser cut sheets and unit sets, products like checks and other pieces will always have a place in the world, even as technology adapts.

“It’s a mature market,” said Bob Diamond, owner of FTI Group LLC, Nampa, Idaho. “[Automated clearing house] and credit cards have been around for 50 years. So, if it was going to go completely out, it would’ve been a faster reaction. All the banks are promoting ACH, promoting credit cards, yet people are still using checks. You can follow a check better than the other products. Plus, it’s a pain in the ass to use ACH, especially on the receiving end.”

It would be bold to say that checks are “recession-proof” or “pandemic-proof,” because we don’t want to jinx anything, but, Diamond added, they’re pretty darn close.

“I think that [checks] are more pandemic-proof than anything else,” he remarked. “Of course, people going out of business don’t need checks. But, the industries affected within our [customer base] are restaurants, tours, things like that. They never needed a whole lot of checks anyway.” 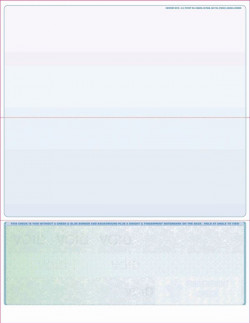 With the ubiquity of checks, print companies need to stand out. In finance, security measures are paramount, as counterfeiters and scammers become more sophisticated. This is where technology and print work well together. Diamond provided a few details about his company’s patented security processes for checks.

FTI Group offers materials, including paper with visible fibers, gold security paper that uses UV dull technology, and fluorescent fibers. On the design side, to combat fraud, the trade printer uses holograms that can’t be reproduced on copiers and scanners, micro-printed text that can’t be seen unless magnified, unique borders with hidden and covert features, patented heat-sensitive ink and dual watermarks.

Diamond recommended appealing to a variety of verticals. If you sell a product, such as checks, that is universal and viable during a crisis or, say, pandemic that leads to the shuttering of other businesses, you are positioning yourself nicely for when the worst happens.

“All of the [sales verticals] use checks,” he said. “Some verticals use more checks than others, like insurance companies, and banks obviously use a lot more than other companies. But, as far as vertical markets, everybody uses checks and everybody pays bills.”

Print may not be dying. But, it still takes finesse to grow in the industry.

“The market reaches maturity, there’s no doubt about that,” Diamond said. “It’s not a growing market, so the only way you increase [sales] is getting more market share.”

When Technology Fails You

During the pandemic, companies that otherwise might have used paper forms are going digital to limit touch points, like doctor’s offices or banks. But even before the world shut down, companies were using tablets for payment and forms. The problem with solely relying on technology is that if it malfunctions or a bug crashes your system at the wrong moment, that’s it. No amount of troubleshooting can help.

Because of that, Joel Isenstein, president of TRI BCI, Normandy, Tenn., said that his business hasn’t actually been as disrupted as some might believe. Part of that has to do with his company’s offering of carbonless forms and other products for payment, etc.

Isenstein has seen the most demand for these products from companies with a field presence, where even if they bring an iPad or similar device, they’ll typically bring printed items, too. 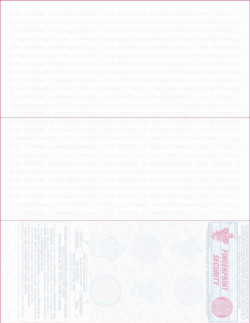 The back of a check with Red Rainbow gradient from FTI Group LLC.

“There are a lot of small businesses that do business where they’re out on the road,” he said. “There’s a lot of tow truck business out there. When people are out and about in the field, there are plenty of places where the equipment, you might have a tablet or whatever, but sometimes they work better than other times, and the standard paper and pen just seems to be the way to transact business for these folks.”

Environmentally conscious businesses have been pushing for paperless business, or at least something close to it, for a while. Even before a pandemic made touch points and sharing pens worrisome, companies were looking for ways to minimize waste. And, as a result, a lot of processes that once involved business forms might have gone online or at least on a tablet.

However, a 2016 investigation by CIO magazine showed that while some businesses might try to go the paperless route, it’s not always easy, cost efficient or even safe to do so entirely.

Keith Kmetz, program vice president for imaging, printing and document solutions for research firm IDC, told CIO that a lot of companies are implementing systems where some of the internal processes that required paper are going online, but the customer-facing aspects are still done on paper.

Think carbonless forms for payment, where customers can fill things out, have a paper receipt to keep for themselves, and then can digitize that form should they choose to do so.

There’s always going to be the fear of some dystopian future run by robots, where technology has taken us under its grip, but the simple truth is that some products, especially within laser cut and unit set printing, will always have a place. After all, we still buy pens, even though we have computers.

Like Diamond said, people will always need checks as long as they need to pay for things. And, as Isenstein said, people will still need to maintain a presence in the field, where full reliance on technology is an unnecessary risk. Throwing in security features and design can attract even more customers if you can give them something the competition doesn’t.

Because of that, companies like theirs have done more than survive. “What I was surprised by frankly was our carbonless work,” Isenstein said. “For April and May, which universally was just down dramatically for virtually anybody and everybody regardless of sector, our carbonless work has been stronger than I ever would’ve anticipated. And I don’t have a great rationale for that.”

I say this again in the optimistic tone, things couldn’t really get much worse. Isenstein agreed.

“It’s impossible to say what the future is going to bring, but I would’ve thought that if there was a point in time where we felt a dramatic drop, this would’ve been it,” he said. “So many people in so many lines of business, god knows in April and May we were changing a lot of things. Everybody was. [...] I feel sometimes a little guilty when I can say our revenues aren’t as horrible as some might think they are.”

Paper Covers Rock, But Where Is the Paper? Jumbo Roll Specialists Get Candid About Their Current Reality

Print+Promo Marketing 2021 State of the Industry Report: The Role of Printed Forms In a Post-Pandemic World

The Jumbo Roll Market Is Growing — Are You?