Will Slow Delivery Cost the USPS Millions During the Election Season? 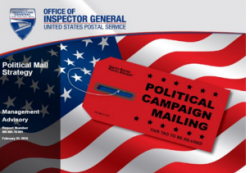 The U.S. Postal Service (USPS) is giving new meaning to the concept of “snail mail.”

The postal inspector general last month published a management advisory that found customers who send out large quantities of political mailings were concerned about “mail delays and service quality.” Anyone who has been following the news knows the cash-strapped USPS can’t afford more bad press—or critical revenue loss. To provide some perspective on what’s at stake, the USPS brought in $525 million in revenue during the 2012 presidential election cycle; the organization hopes to double that amount for the 2016 presidential election cycle, setting an aggressive goal of $1 billion in political mail revenue.

According to the postal inspector general, the USPS has developed a comprehensive 2016 political mail strategy, which covers national, state and local elections. The strategy, a culmination of lessons learned from the 2012 election season, includes the following key facets:

For some, these efforts might be too late. One major national political mailer described the USPS’ handling of First-Class and nonprofit mail delivery in September 2015 as “abysmal.” As reported in the release:

In early October, the mailer expressed concerns about unstable patterns for receiving Business Reply Mail (BRM), which is used for fundraising activities. Specifically, the mailer received BRM on Oct. 13, 2015, that had been postmarked in August.

And it doesn’t stop there. An unnamed USPS official admitted to an ongoing issue with consistent delivery of political mail at one particular facility for the past four years. According to this official, such concerns “have led many mailers to shift from mail to other forms of advertising.”

What has the experience been like for you and your customers? Sound off in the comments section below.