Xanté, Mobile, Ala., is proud to report that during August 2016 the total number of envelopes produced by its customers has increased dramatically. In August, Xanté Impressia's around the world created 107 million digital color envelopes, as compared to 57 million during April 2016. 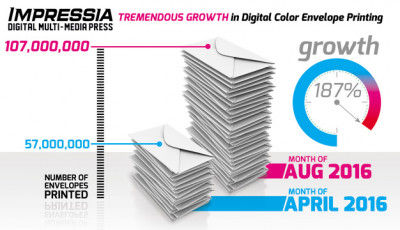 “The growth in envelope printing has even been a surprise to us at Xanté,” said Robert Ross, CEO for Xanté. “We believe this impressive growth is not only from traditional business envelope printing, but more significantly, the invitation markets. The graduation and wedding invitation markets have exploded this season. Another market showing strength is the increase in political printing.

“We believe that market will show higher growth in the fall as we get closer to the elections,” he continued. “In the winter, the holiday card markets will pick up from there. We have significant installations of Impressias at nearly all the major vendors of online holiday cards. Last year, November and December showed drastic increases from previous years.”

The Impressia’s ability to print on a wide variety of media, such as NCR, letterhead, cards, envelopes, forms, brochures, mailers, labels, banners and more, makes it perfectly suited for commercial print. Xanté is fully expecting to see a continuation of growth in the number of monthly impressions and will again report results in January 2017.