How Diamond Packaging Takes its Promotional Calendar to the Next Level

Promotional calendars are nothing new — printers have been regaling customers and prospects with them for decades. But, when a specimen like the 2019 wall planner from Diamond Packaging comes along, it asks us to think of printers’ calendars not just as marketing giveaways, but as works of art and platforms for interactive “smart” technologies as well.

Those are heavy mandates to place on something that, strictly speaking, doesn’t need to consist of anything more complicated than 12 monthly grids, pages that flip, and a perforation for hanging. And, there’s no getting around the fact that printed calendars have long since given way to their digital equivalents as sources of the daily appointment reminders that busy people rely on.

But, by surrounding these basic ingredients with some of the most elaborate special effects that offset lithographic printing is capable of (see sidebar below), Diamond Packaging has made the calendar’s date-keeping function almost secondary. Those lucky enough to have received one — only 2,500 hand-assembled copies have been produced to date — probably will be content just to gaze upon its rich colors and feel its sculpted contours even if they never make a single notation in a day box.

This isn’t to say that Diamond Packaging’s 2019 calendar fails to serve its traditional purpose. It presents not just one but three sets of monthly pages — a feature that customers appreciate, says Dennis M. Bacchetta, the company’s director of marketing, because it lets them keep the past, present, and upcoming month in view at once. This convenience, however, was only the beginning of what Diamond Packaging envisioned in the calendar’s creative brief.

One objective, Bacchetta says, was “to create a colorful, beautifully decorated structural and ornamental piece, one that users will want to have near their desks.” In this, the calendar succeeds spectacularly on every one of its four wire-bound panels. As vivid as they are, the close-up images reproduced here do only partial justice to the look and feel of the resplendent physical object adorning the wall a couple of feet away as this is being written.

The motif, as Bacchetta describes it, “creates a cross-sectional view of waves splashing against a tropical beach, but with a twist: to depict the artwork as a mosaic.” This is convincingly achieved with seven colors of ink, cold foiling, UV gloss spot coating, specialty coating, multilevel embossing, debossing and diecutting coming together in eye-candy imagery that almost seems to move as it shimmers. The dramatic sunset on the top panel, for example, was cold foiled and embossed in each of its geometric color patterns, within the yellow rays, and around the entire outline.

As an all-in-one showcase of these techniques, the calendar makes a powerful statement about the capabilities Diamond Packaging can bring to bear in enhancing its customers’ brands. Bacchetta says its production also highlights the company’s sustainable manufacturing methods, which include wind credits purchased for 100% of energy used and complete recyclability of all scrap and waste leaving the plant.

In a class by itself aesthetically, the calendar could rest on its laurels right there as the “preeminent promotional piece” Bacchetta says Diamond Packaging intended it to be. But, on the lower edge of the bottom panel, a small, protruding tab that reads TOUCH PHONE HERE reveals the other dimension of the concept underlying the project.

It contains an NFC (near field communication) smart tag from Thinfilm, and when a natively NFC-enabled smart phone (or one with a downloadable app) is brought into contact with the tab, the calendar instantly becomes every bit as high-tech as it is high-touch.

Activating the NFC connection triggers phone-displayed content that includes a “making of” video describing the creation of the calendar, along with links to a free sample kit offer and Diamond Packaging’s Instagram and web home pages. On four different dates this year, tapping the tag will display new content specific to each date — for instance, messages signaling Diamond Packaging’s support of Earth Day on April 22.

The goal here, according to Bacchetta, is to let the calendar serve as a proof of concept for what NFC tagging can do to help brands engage directly with consumers by means of smart packaging. 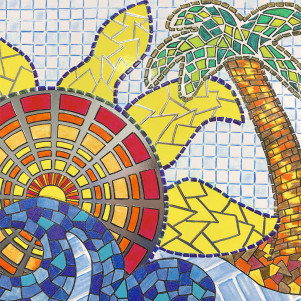 He says that when consumers tap smart packages, the action generates “affordable, item-level intelligence” (such as the locations where the taps are coming from) that brand owners can use to target the content delivered in response — for instance, a discount coupon good for the store where the consumer is shopping at the time. NFC tags, he notes, are more efficient than QR codes and are easily integrated into folding cartons.

“If we can do this, you can do the same thing,” is what Diamond Packaging hopes the calendar will convey to brands, Bacchetta says, adding that the company sees opportunities to incorporate NFC smart tags, anti-counterfeiting, track-and-trace and other smart technologies in packaging for any of the industries it serves.

Development of the 2019 calendar began in January of the prior year under a five-member “calendar team” that included Renee Guercio, the design engineer to whom the principal artistic credit belongs. Bacchetta emphasizes, however, that creative input came from throughout the company.

For example, collaboration between lead embossing operator Bill Poniatoski and die manufacturer Metal Magic led to suggestions for optimizing the embossing and debossing dies to add realism to the design of the waves. Bacchetta says that by the time the calendar was ready to ship last October, everyone had weighed in, including Karla Fichter, Diamond Packaging’s owner and CEO.

The company’s 2018 calendar won Third Place in the “Specialty – Technical Achievement” category in the 32nd annual packagePRINTING Excellence Awards competition. The 2019 calendar will be entered in the same category and under “Sustainability – Folding Cartons” in the competition’s 33rd edition this year.

We’ll leave that call to the judges. For the moment, we’re just wondering what Diamond Packaging could possibly do to top itself with the calendar for 2020, which presumably is in the planning stage right now. But, we’ll be watching. When the printing is this dazzling, we can’t look away.

Here are the production details as supplied by Diamond Packaging.

Patrick Henry is the director of Liberty or Death Communications. He is also a former Senior Editor at NAPCO Media and long time industry veteran.