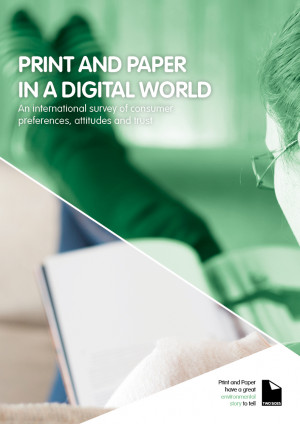 The list includes many of the Fortune 500 companies in the financial, telecom, utilities and insurance sectors who have engaged with Two Sides and modified their marketing messages to consider the social and environmental benefits of print and paper, as well as the life cycle of sustainable forests and paper products. A full list of companies is available to Two Sides members.

“The ‘go green and save trees’ claims used to promote digital services over paper-based communications are misleading for many reasons, and they are a form of greenwashing that needs to be corrected,” said Phil Riebel, president of Two Sides North America. “The claims don’t consider the renewability of paper, or the numerous social, environmental and economic benefits of well-managed North American forests, which in the U.S. have grown by over 1.3 million acres per year between 2005 and 2015, or approximately 22,000 tennis courts per day (United Nations Food and Agriculture Organization, Global Forest Resources Assessment 2005-2015).

According to a recent survey commissioned by Two Sides, U.S. consumers are skeptical about paperless green claims made by corporations. The survey, carried out by the global polling firm Toluna, found that 72 percent of U.S. respondents agree that claims about the switch to digital being better for the environment are made because the sender wants to save money. Furthermore, 73 percent agree that government, banks and other organizations want to persuade them to ‘go paperless’, but it’s not ‘paperless’ because they regularly have to print out documents at home if they want a hard copy. In fact, 68 percent find it easier to track their expenses and manage their finances when they are printed on paper. The full report and U.S. findings are available at http://twosidesna.org/Survey2017.

As part of its campaign, Two Sides also noted that it is false to associate paper with deforestation in North America. The United Nations Food and Agriculture Organization defines deforestation as the conversion of forests to another land use or a permanent loss of forest cover. The UN definition specifically excludes sustainably managed forests where the forest is expected to regenerate naturally or via tree planting, as in North American managed forestlands.

Two Sides is urging companies to avoid greenwashing consumers by using best marketing practices that meet guidelines established by the U.S. Federal Trade Commission (FTC) and the Competition Bureau of Canada. Environmental claims cannot be vague and unsubstantiated—they must be specific, verifiable and based on credible facts.

“Our experience to date is that many companies are so focused on reducing costs that they are ignoring marketing rules, the needs of their customers, and the environmental and social impacts of switching from paper to digital,” said Riebel.

Are You Using Alternate Paper Due to Shortages?