Target Report: Cenveo Returns to Its Roots as an Envelope Manufacturer 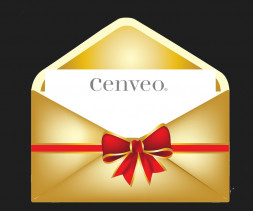 Good Times in the Envelope Business

In what appears to be a positive end to a long and tortuous road, the management team of Cenveo has completed a management buyout of the company. The Burton family, which has effectively controlled the company since 2005, is now collectively the majority shareholder, with the balance of the equity owned by other senior executives.

Cenveo, which started as an envelope manufacturer over one hundred years ago, and at one time seemed bent on acquiring anything but envelope manufacturers, has now been pared back down to its core. What remains is an envelope printing and converting powerhouse. According to the press release announcing the management buyout, “Cenveo is now exclusively an envelope focused business and the largest envelope converter in North America.”

The management buyout transaction may be an example of brilliant strategic planning, or simply good luck getting the timing just right. The envelope business has gone from being a highly price-sensitive commodity business to become a critical component in the print-centric direct mail and transactional document supply chain. For those readers of The Target Report who are not intimately familiar with the printing business, let’s just say that printers and mailers have been scrambling to obtain sufficient quantities of envelopes to complete customer orders. With the ongoing paper shortage (see Paper Industry in Transition – May 2022), converters have resorted to filling orders with brown paper stocks that are more difficult to convert into envelopes and tougher for direct mail printers to process, in lieu of normally widely available standard white paper.

The supply-demand curve has inverted, envelopes are in demand and in short supply. Presumably, this has been good for envelope manufacturers, at least until the market comes back into balance. Cenveo is, finally, in a good spot.

When we last wrote about Cenveo’s stream of divestitures, in the fall of 2020, the company had just completed the sale of its Cenveo Worldwide Publisher Services division to CJK Group. This transaction followed right on the heels of the sale of a publication printing plant in Pennsylvania and a fulfillment and digital printing plant in Maryland, both sold to Intellicor, a Pennsylvania-based direct mail roll-up. In addition to these divestitures, Cenveo completed a long string of plant closures, wrapping up with the shutdown of the former Cadmus Communications publication printing plant in Richmond, Virginia.

These were only the most recent transactions in a steady drumbeat of divisional sales and plant closures, all surrounding the filing for Chapter 11 bankruptcy protection in 2018. Throughout all this churning, it was difficult to discern if there was any rhyme or reason to the unwinding. The divisions that most printing-related companies would consider to be prize assets, such as manufacturers of folding cartons, shrink sleeves, and labels — all went on the chopping block. There was even, in the midst of the frenzied disassembly, a sale of an envelope company, Quality Park Envelope in Minneapolis, to LSC Communications. If management was executing a planned strategy to convert the conglomerate to a pure envelope company, it was nonetheless not apparent at the time (see CJK Goes Global as Cenveo Unwinds – September 2020).

The Picture Gets Clear

In August 2021, the printing world learned that a new consolidator in the commercial printing segment had stepped up to the big stage and acquired the commercial printing business of Cenveo, including three large printing facilities in Eureka, Missouri, Amarillo, Texas, and San Antonio, Texas. With financial backing from JAL Equity, the consolidator had quietly built up a national network of 15 printing plants. The new entity was named ColorArt, an apparent homage to the Missouri plant’s original owner before being acquired by Mail-Well, the predecessor to Cenveo (more on this later). With this sale, Cenveo took itself out of the highly competitive commodity-level high-volume commercial printing business.

Once more staying in the divestiture mode, Cenveo unloaded its Custom Labels Group, in a sale earlier this year, to Brook + Whittle, the label, shrink sleeve and flexible packaging roll-up currently backed by Genstar Capital. Now distilled down to purely an envelope manufacturing company, Cenveo was poised for the management buyout.

How Did it Get This Crazy?

Cenveo traces its roots back to 1919 when two entrepreneurs moved west from Missouri and founded the Rocky Mountain Envelope Company. With the rapid economic growth of the Denver region, the company took off, along with many other “Rocky Mountain” brands, so the founders completed the first rebranding and began manufacturing “Mail-Well” products under the new corporate name, Rockmont Envelope Company.

It was all envelopes until the late 1950s when the company made some modest inroads into printing stationery and paper bags. In 1960 Rockmont began to diversify, first into school supplies, notebooks, memo pads and tablets. The company rebranded once again as Pak-Well, with Rockmont Envelope now structured as the company’s subsidiary. The company did not escape the early 60’s go-public craze for mid-size manufacturers and was taken public when revenue was slightly more than $13 million. In addition to its home base of Denver, Colorado, the company had manufacturing plants in Portland, Houston, Phoenix, Los Angeles, Salt Lake City, and Honolulu.

Reported earnings were never stellar. In the early 1970s, the company posted net earnings of only $1.74 million on sales of $53.8 million (3.23%), establishing a trend of low margins that would continue as the company grew.

Through a series of transactions, Pak-Well eventually became part of the paper company Great Northern Nekoosa Corporation, which subsequently was rolled into Georgia-Pacific in 1990. By this time, the division was back to strictly producing envelopes under the Mail-Well brand, as well as under the Wisco Envelopes brand.

The low margin envelope business was spun out of Georgia-Pacific in 1993 as the Mail-Well company, with 16 manufacturing plants (remember this number) that produced about 13 billion envelopes annually. Leverage was high, with $17 million in equity supporting $142 million of debt, another trend that would continue. Acquisitions were on the table from jump, including the 1994 purchase of American Envelope Company and the addition of Canadian envelope manufacturing Supremex in 1995 (subsequently one of the first spin-offs under Cenveo in 2005). In 1995 the company went public once again, decreasing leverage, although not for long. Margins remained tight, with reported net income of $8 million on sales of $597 million (1.34%).

1995 also marked the diversion of Mail-Well away from the commodity printed products business and into the business of very high-quality commercial printing, with the acquisition of the Graphics Arts Center in Portland, Oregon. Instead of plain-Jane envelope products, Mail-Well had entered the business of technologically-advanced high-craft printing of critical color marketing materials, such as annual reports and automotive brochures. It had also begun to compete in the business of providing trade printing services to the distributor market, with the acquisition of Murray Envelope in Mississippi.

Mail-Well was on a tear, competing with Consolidated Graphics to see which company could acquire more, faster. In 1998 alone, Mail-Well rang up 23 acquisitions, including the purchase of creme de la creme commercial printing company Anderson Lithograph in Los Angeles. The same year, the company entered the packaging business with the purchase of the label division of Lawson Mardon Packaging. In May of that year, Mail-Well completed a simultaneous merger with seven commercial printing companies in an exchange of stock, the largest of which was St. Louis-based Color Art with revenue of $75 million. By 1998, Mail-Well boasted revenue of $1.5 billion. However, net income remained a dismal, in relative terms, $21.7 million (1.45%).

Things began to sour in 2000, when the company reported sales of $2.43 billion and net income of $27.6 million (1.14%). The company now employed in excess of 13,000 people across the US and Europe, operating 110 printing plants. The turn of the millennium also marked the beginning of a long-drawn-out phase of restructuring, merger of operating divisions, and closure of facilities. The company rebranded again in 2004 to the somewhat perplexing name “Cenveo” (Rockmont Envelope anyone?)

The dealmaking days were not over, however, and in 2007 Cenveo purchased Cadmus Communications, further diversifying the company as a major provider of content management and production of scientific, technical, and medical journals.

In what now appears to have been a prescient move, Cenveo’s last major acquisition was the purchase of bankrupt National Envelope in 2013. The deal, structured as a 363 sale in the bankruptcy proceeding, was a bargain, reported to be $25 million for a $300 million revenue business. With this transaction, the latest in a string too long to recite here, the company returns to its roots. Cenveo is now an envelope manufacturer, producing approximately 50 billion envelopes annually in 14 plants across the US.

The question remains, can the new owners of Cenveo stick to the core business and when the time comes to grow once again by acquisition, will the path be clearly defined, strategically adjunctive, and financially accretive to the company?

Earlier this year in March, Tension Corporation, one of the largest manufacturers of envelopes in the US, announced the acquisition of the print division assets of Intellus Direct. The acquired division is the successor to the former IBS Direct, a direct mail and envelope converter located in King of Prussia, Pennsylvania. The plant operated under the short-lived name Intellus Marketing, a direct mail roll-up which acquired the IBS Direct plant in 2018, among other assets now sold off.

A new envelope manufacturing platform company with private equity backing was announced in July. CenterGate Capital, based in Austin, Texas, purchased United Envelope. The acquired company is based in Ridgefield, New Jersey and has additional manufacturing locations in Pennsylvania and Ohio. CenterGate is seeking add-ons in the envelope segment. However, not content to keep its focus strictly on envelopes, CenterGate also states that it will consider add-ons in flexible packaging, folding cartons, paper-based products, and other graphic arts services. 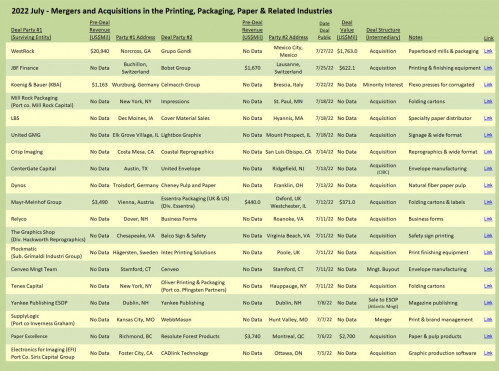 Mark Hahn is a managing director and founder of Graphic Arts Advisors, a boutique strategic financial advisory and consulting firm focused exclusively on the printing, packaging, mailing, marketing services, brand management, and related graphic communications industries. With more than 35 years of graphic communications experience in the areas of finance, operations, sales, M&A, and general management, Hahn has served as chief financial officer, chief operating officer and other senior positions with several commercial printing companies, as well as founding and eventually selling his own printing company.

The firm assists company owners and management, as well as their lenders, investors and shareholders in the following areas: mergers and acquisitions, sale of business, strategic and financial advisory, capital structure and funding, financial analysis, interim and turnaround C-level management, business valuations and serving as consulting experts. Hahn is the author of The Target Report and is regularly published and quoted in printing industry trade and management journals.