The jump in seizures may not be drastic, but things don’t appear to be headed in the right direction. Of the other counterfeit commodities that were seized, only one category (consumer electronics) saw a decline in seizures with 5,326 compared to last year’s 5,432. Wearing apparel/accessories once again topped the list with 6,232 seizures, which was 22 percent of all seizures. 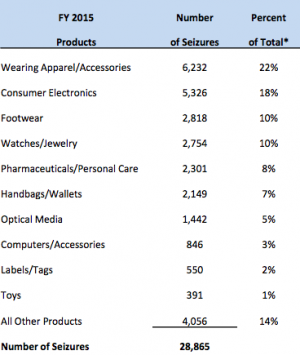 “Counterfeit goods present health and safety hazards, threaten the U.S. economy and fund organizations involved in violent crime,” Sarah R. Saldaña, director of ICE, said in a release. “ICE is committed to working with CBP and our law enforcement partners to protect American jobs and people by stemming the illicit flow of these products into our country and our communities.”

2021 Top Suppliers: Here's How Discount Labels is Investing in the Future
Comments
Subscribe
The Top 50