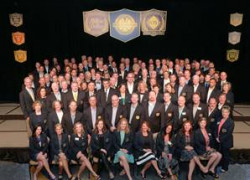 “This trip represents our core mission at Proforma—to help people pursue their big dreams and live amazing lives,” said Greg Muzzillo, founder of Proforma. “It is an honor to celebrate the incredible accomplishments of this inspiring group of owners in one of the most beautiful locations in the country. We are grateful for every member of the Proforma family and their contributions that have led Proforma to a half billion dollars in sales in 2015. With the industry’s best and most successful owners on our team, we have our sights set on our first billion-dollar year.”

“I couldn’t imagine a better place to reflect on a year of new accomplishments and build relationships for the future than PGA National,” said Jim Shindler, co-owner of Proforma Graphic Services, Columbus, Ohio, and first-time 10 Million Dollar Club Member. “It is an honor to celebrate with our fellow owners, support team members and the supplier partners who have helped us increase our sales by 50 percent over the past two years, propelling us into Proforma’s 10 Million Dollar Club. This would not have been possible without Proforma’s support and resources.”

“With Proforma, I have increased my sales by more than 800 percent over the past two years, adding more than $1 million in new sales to my bottom line,” said Vivek Narola, owner of Stoney Creek, Ontario-based Proforma Battlefield Advertising and first-time Million Dollar Club member. “Proforma’s business development team has made it possible for me to grow faster, more efficiently and easier than I ever could on my own. They put me in the position to acquire some of my competitors, win major accounts and get on the fast track to substantial growth. Putting a Million Dollar Club jacket on this week has been a dream come true.”

Every year, owners achieving at least $1 million in sales are invited on a three-day getaway to a world-class resort, where they enjoy networking with supplier partners and celebrating each other’s accomplishments. The next Million Dollar Club celebration will be held at the Ritz Carlton, Dove Mountain in Tucson, Ariz., April 9 to 13, 2017.