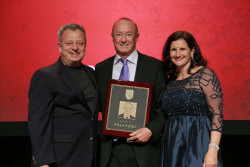 Proforma inducted Fran Ford (center) into its Hall of Fame.

“Proforma’s convention is the only event that brings together the most successful distributors and best supplier partners to collaborate, and share innovative ideas and strategies for growing together,” said Greg Muzzillo, founder of Proforma. “I’ve never been more optimistic about the future of Proforma. With the best thought leadership from our owners and supplier partners, both working together to form a new vision and implement new methods for continued success, Proforma is undoubtedly leading the industry into the future.”

Headlining events included a “TEDx”-style owner presentation that showcased 12 of Proforma’s million and multimillion-dollar producers, representing more than $80 million in collective sales, sharing their best strategies for increasing sales. Owners and suppliers also began planning how they can continue to grow together in the coming year during the industry’s largest private vendor showcase, and dozens of supplier-led education and networking events.

“There is no place like Proforma’s convention to help us stay locked in and fired up to turn all the education we receive into action and results,” said Jeff Rothchild, owner of Park City, Utah-based Proforma Peak Printing and Promotions, and Million Dollar Club member. “This is the best opportunity for us to learn from the most successful owners and have one-on-one, meaningful conversations with industry-leading suppliers. Every year, I come away from this event more knowledgeable, motivated, connected and prepared to pursue my business goals.”

One of the most powerful moments of the event was Ford’s induction into Proforma’s Hall of Fame. Ford has had a vital role in advancing Proforma’s mission by making valuable introductions between the leadership team and key partners, and helping to form and strengthen vital business relationships. His collaborative spirit and innovative ideas have led to several programs that have helped owners increase their sales and solidify Proforma as a prominent leader in the industry.

“We are honored and proud to have Fran Ford as an adviser, confidant, friend and member of the Proforma family,” said Muzzillo. “Fran’s industry knowledge, experience and expertise has made him instrumental in helping Proforma continue to reach new levels of success, and we are thankful for his vision and support.”

Proforma will hold the 2017 Convention and Family Reunion from July 23 to 26, 2017 in Orlando, Fla., at the Gaylord Palms Resort and Convention Center.