The Results are In: Printing Executives Support Trump, According to NAPCO Survey

On Sept. 26, more than 80 million people tuned in to watch presidential hopefuls Donald Trump and Hillary Clinton square off in the first of three planned debates, setting a new record. A quick Google search showed the overwhelming majority of political pundits favored Clinton’s performance; however, according to a new study from NAPCO Media Research (NAPCO Media is the parent company of Print+Promo), Trump is king among print executives.

The survey, “Make American Business Great Again: Corporate Leaders Choose Trump Over Clinton,” polled 810 business leaders across the printing, consumer electronics, promotional products and nonprofit industries to determine how each sector will vote in the upcoming election—and why. Results showed that three of the four industries chose the Republican ticket, with 54 percent of all respondents supporting Trump, compared to the 32 percent supporting Clinton and the 14 percent who remain undecided. It also is important to note that Clinton trailed Trump by at least 20 percent in those industries. She did, however, finish strong in the nonprofit sector, with a 53 percent approval rate from respondents. 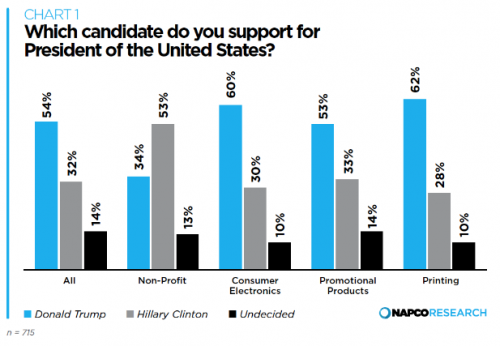 Of the four industries surveyed, Trump performed best with printers, clocking in 62 percent support, which is more than double Clinton’s 28 percent. Perhaps this shouldn’t come as a surprise, considering the print sector is historically male-dominated—Trump, a businessman himself, has polled favorably with men, while Clinton has struggled with this very demographic. But a closer look at the numbers reveals a different story. Though Trump got his strongest support from printers, 35 percent admitted they would vote for him because they don’t believe in the alternative, which isn’t exactly a glowing endorsement.

The common thread between most sectors was the economy. In fact, 63 percent of business leaders feel Trump is best-suited to grow the economy, and as high as 70 percent of respondents in the printing industry contributed to that belief. As for the priority of issues, national security, immigration concerns and character influenced printers’ leanings, with social issues ranking last at 44 percent. 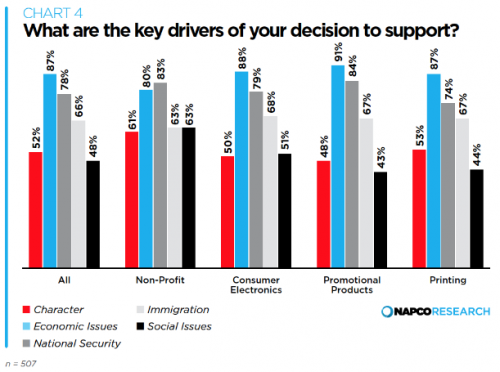 We recognize that this study does not represent the views of every printing executive. And who knows, maybe opinions have changed post-debate; or maybe the first vice presidential debate, scheduled for tonight, will shake things up.

Want to learn more? The study features a host of other key political findings, so be sure to check out the full version. Click here or on the image below to download a PDF. 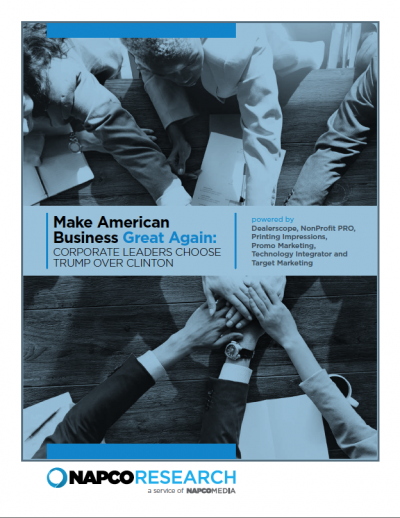