Zombies Rise Up On Interactive The Walking Dead Wine Labels

There may not be a better pairing than wine and cheese, but the Last Wine Company, a brand of Treasury Wine Estates in Napa Valley, Calif., wants consumers to think beyond aged gouda. Its recommendation? Bloodthirsty zombies.

With the help of augmented reality, the Last Wine Company has unveiled two new "The Walking Dead" wines that come alive in cool ways. Each bottle features a label that responds to the downloadable Living Wine Labels app, previously known as “19 Crimes.” (In case you’re not familiar, the 19 Crimes brand features portraits of infamous prisoners whose punishments were transportation to Australia in the late 1700s.) In addition to The Walking Dead wines, the Living Wine Labels app will continue to work with 19 Crimes wine labels, along with labels from Chateau St. Jean, Beringer Brothers and Gentleman’s Collection.

First in The Walking Dead collection is the “Blood Red Blend,” whose label highlights an intense faceoff between the undead and the Sheriff Rick Grimes character. When the app is launched and pointed at the bottle, Grimes fights off the zombies. 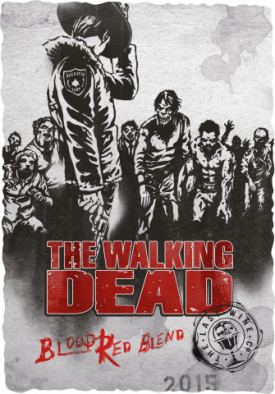 Red wine lovers also may enjoy the no-frills named “Cabernet Sauvignon.” This label features a horde of zombies that, via the app, break out of the label and "shatter" the phone screen. 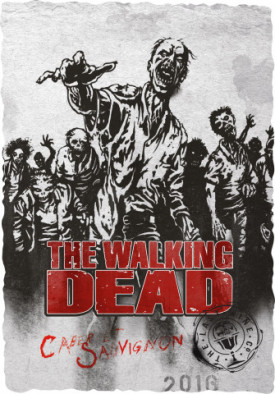 You may be wondering what happens if you point the app at both labels side-by-side. Oh, just an epic battle between both sets of characters—no big deal.

Details extend to the corks, as well. They are collectible and showcase a variety of images, including barbed wire, a walker hand and an undead hand.

Based on the best-selling "The Walking Dead" comic series by Robert Kirkman, The Walking Dead television show will end its winter hiatus and return to AMC in February. Naturally, that’s also when consumers can find the The Walking Dead wine collection on shelves, retailing for $18.99 a piece.