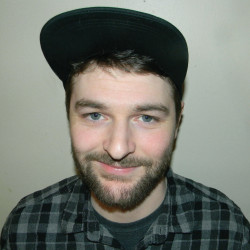 A newspaper editor walks into a bar ... No, this isn’t the introduction to a joke, but rather, how a creative writing major ends up in the printing industry. Just ask Chris Pike, project manager for Wright Business Graphics. After completing his studies at Texas State University, Pike worked as a bartender for roughly two years. One of his regular customers turned out to be the managing editor of the local paper. The editor learned that Pike liked to draw cartoons on the side, so he gave him the chance to draw a few in a professional capacity. “To be honest, he’d had more than a few drinks by then, and I wasn’t sure if he’d remember our conversation, but, nonetheless, I took some cartoons in to show him the next day, and he hired me on the spot,” Pike said. A couple of months in, the production manager left to start his own newspaper, so Pike gave the job a try. While his duties mostly included pagination and prepress, he liked it enough to make the move to Portland with his fiancée and begin his career with Wright Business Graphics.

Why he loves the industry: I love that there’s a tangible end result. There aren’t many careers now where, at the end of the day, you actually get to see what you’ve been working for. Whether it’s a huge perfect-bound book or just 100 postcards, you get to see it when it’s done. You get to hold it in your hands and know that, at least in some way, you had a part in creating it. I can’t think of many other jobs that are more rewarding.

Age roadblocks and advantages: The biggest challenge is definitely inexperience. Thanks to the people I work with, I’ve learned a lot in a very short time, but in the grand scheme of the industry, I still know very little. That’s sort of an advantage, too. Every day I learn something new about printing. It’s hard to get bored when you’re learning new stuff all the time.

His biggest career influence: It boils down to three people at Wright Business Graphics: Allan Piispanen, senior estimator; Robin Dodd, director of the commercial print and packaging division; and Gordon Klepec, vice president of sales and marketing. Allan because he taught me just about all the functional knowledge I have about printing. Robin because he’s been a mentor to me and has encouraged my growth in the industry every step of the way. And Gordon because printing can be very stressful, and anytime I start to feel overwhelmed, he’s always there with an Austin Powers or a Pitch Perfect reference to bring me back down to earth and calm me down.

His most meaningful business  accomplishment: The most meaningful accomplishment I’ve had so far is becoming a trusted and counted upon member of the Wright team. I started out as an assistant to the shipping clerk and, thanks to the faith of people like Robin and Gordon, I’ve moved into my current role as a project manager. Giving me that much responsibility in such a short amount of time was probably pretty risky for them. Hopefully, I’ve proven myself.

His differentiating factor: I work for a company that is constantly making itself more relevant in the industry. Wright Business Graphics started as a forms manufacturer. Over time, we’ve added commercial printing, on-demand printing and packaging. The key to staying afloat in an industry that too many hastily toss aside as obsolete is to stay diverse. Wright strives for that every day. I believe in that cause and I try my best to work with the company toward that goal.

What he does for fun: Like I mentioned before, I like to draw cartoons. I spend most of my free time drawing and playing guitar. I can draw a decent cartoon but, after years of playing, I’m still a terrible musician.