Under 40: Travis Stein, The Odee Company 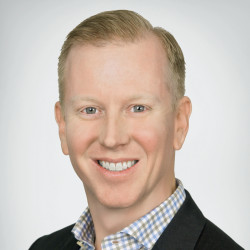 Developing a career path isn’t high priority for most elementary school students; but, then again, Travis Stein wasn’t the average sixth grader. The now-principal partner of The Odee Company joked that he got his big industry break when he and his best friend began going door-to-door branding home addresses. His real point of entry into the print and promotional sector, however, occurred during his senior year at Austin College when Buzz Tatom, then-owner of The Odee Company, recruited him. According to Stein, Buzz was “looking for a collegiate football player, like himself, who wasn’t the most successful at their sport necessarily, but who continuously strived to be his best when faced with adversity.” Eager to get to work, Stein began a six-month training program on the floor and presses, only to be released just three months later to sell commercial print and promotional products. His first day? Sept. 1, 2001—less than two weeks before the 9/11 attacks. Presented with a new set of challenges to overcome, Stein worked hard and never stopped learning from The Odee Company’s tenured staff. Approximately 10 years later, Buzz gave Stein the opportunity to become owner with Jay Atkinson and Steve Holland. Since 2009, the company has increased sales every year.

Why he loves the industry: Commercial printing and promotional products allow me to work in every kind of industry. I am a people person and can find common ground with mostly anyone, so I love getting to know my clients, learn their trade/craft/operations and become their partner. I enjoy building lasting relationships and witnessing (or being a part of) their success. There’s no greater feeling than knowing The Odee Company made them look good.

Age roadblocks and advantages: Starting out was very difficult because I was young, hungry and ready to compete, but what helped me was my persistence and the fact that The Odee Company had built such a strong national presence since 1923. ... At this age, I am able to relate with younger, fresh-faced individuals just starting their careers and I enjoy teaching them what I know, as well as being able to build partnerships with those in the industry 40-plus years later.

His biggest career influence: Jay Atkinson has been dominating Odee since 1979. Every day I watch him problem solve, manage our operations—all while making our employees feel valued. The Odee Company is what it is today because of Jay. I also consult with my older brother, Rusty Stein, who is president of Beneplace in Austin, Texas, on a weekly basis. He’s a brilliant leader and motivator.

His most meaningful business accomplishment: Making our clients look good with their internal audience/employees, and their clients, which, in turn, allows us to employ our incredible staff; 30 of the best individuals in our industry who work hard to take clients’ concepts to a material, deliverable or keepsake.

His differentiating factor: There is no magic ingredient, but a key ingredient of The Odee Company is being debt-free. If a client has a particular need and it benefits both of us, we’ll move forward in purchasing the necessary equipment. For example, in 2012, a Fortune 500 client told us they trusted our staff and operations when it came to printing and fulfillment, [and] that they wanted us to handle their wide format needs, too. In two months, we had traveled thousands of miles across country for demos, research and training. We purchased the new equipment and were producing at the start of month three. Wide-format printing is now an offering for all of our clients.

What he does for fun: Before becoming an owner in 2011, and welcoming my first son in 2012, and another son in 2016, I enjoyed golf, fishing and college football Saturdays. Post-2011, I enjoy traveling with my wife and roughhousing with my two boys, which is all I have time for.

When Selling Print: Are You Prepared to Negotiate?

Selling to the Manufacturing Vertical: Issues, Opportunities and the COVID-19 Effect

How COVID-19 is Affecting 3 Key Vertical Markets, and What Distributors Should Know