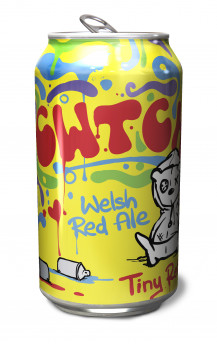 Earlier this month, Beverage Daily reported that Tiny Rebel Brewing Co. of Newport, Wales, changed the packaging design for one of its beers because the Portman Group, the U.K.'s alcohol self-regulating body, decided that it "could appeal to children." Redesigning the can ultimately took five months and $40,000 Beverage Daily writes.

The can featured graffiti-like text, the name of the beer (Cwtch Welsh Red Ale) and an illustration of a bear in a hoodie. Although the can clearly said that it was an "Ale" and stated that the beverage contained 4.6% ABV, it was deemed to appeal to children and teens. So what was so child-like and enticing about the cans that warranted the forced change? According to a release by the Portman Group, it was the combination of a few items that put it over the edge:

When considering the image of the bear on the front of the can, and its positioning alongside the wording ‘Tiny Rebel’, the Panel agreed that the packaging indirectly encouraged immoderate consumption. The Panel also considered the prominence of the bear above the wording ‘Tiny Rebel’, in combination with the graffiti and swirling primary colours, caused the product to have a particular appeal to under-18s. 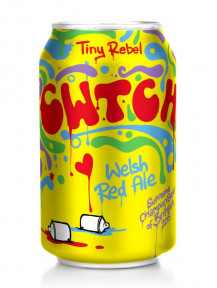 What's interesting is that the bear in question happens to be a sort-of "mascot" for the brewery, developed at the inception of the brewery in 2011 to capture the company's desired aesthetic.

The question is, does this decision stifle creativity? The report from Beverage Daily brings up the point that this sets a precedent for the beverage industry. The Portman Group citing the brand's name and an illustration of a bear as valid reasons for the company to change its packaging could prevent other brands from experimenting with color and design. Tiny Rebel also stated that there aren't clear enough guidelines as to what is and is not considered to appeal to children.

This isn't the first time the Portman Group has stepped in and deemed packaging to "appeal to under-18s" though. On the Group's website, there are multiple cases where brands were forced to change their packaging due to filed complaints. One brand in particular, Big Beastie, a vodka drink, was informed that it needed to change its packaging in 2008. Portman Group stated that the packaging's colors and use of a spiderweb were considered to be "childish." From a press release on the Group's decision:

It considered that the garish colours, coupled with the childish outline of a spider and its web, would still cause the product to appeal particularly to under-18s. It therefore found the product’s packaging in breach of Code paragraph 3.2(h).

In the end, the company supplying the drink informed the Group that it would voluntarily remove its product from the shelves in early 2009.

In my opinion, it seems a bit subjective. Big Beastie in no way screams childish to me, especially because it is clearly a vodka drink, as evidenced by the two times it says "vodka" on the front of the bottle.

It's crucial that alcohol doesn't end up in the hands of children, but if the rules are unclear as to what constitutes a childish design, there will continue to be cases like Tiny Rebel's and Big Beastie's. There is a fine line when deciding if something is being marketed to its intended audience, but there should definitely be more concrete guidelines when it comes to an age-prohibitive product that needs to be able to stand out on shelf.

Ashley Roberts is the Senior Production Editor of the Printing & Packaging Group.