State of the Industry Report: Welcome to an election year where anything can happen

Editor’s Note: News about the novel coronavirus is changing quickly. As we finalized our 2020 Print+Promo State of the Industry Report, health officials had reported 10 deaths in Washington state and one in California. Today, there are 48,720 cases and 588 deaths across the country, and those numbers will be different by the time you read this. Furthermore, COVID-19’s effect on the economy has been profound. Print+Promo will update accordingly. Stay safe and be well.

Download Our Complete 2020 State of the Industry Report Here

President Donald Trump spoke last month to a bitterly divided Congress—and a large, at-home viewing audience—to make his case for reelection in November. The highly anticipated State of the Union address was peppered with plenty of TV-worthy moments that ended with Democratic House Speaker Nancy Pelosi tearing her copy of the speech in half. Trump made no mention of his impeachment, a subject that had riveted Washington for months. He did, however, declare that “the state of our union is stronger than ever before.” 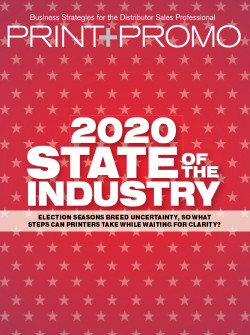 While the U.S. economy did, in fact, grow 2.3 percent in 2019, that number fell short of the president’s promise to deliver at least 3 percent growth. Furthermore, last year’s growth was the weakest since Trump took office, according to Commerce Department data released in January, partly because his escalating trade war with China curbed business spending and investment. But, as The Washington Post pointed out, 2019’s growth “showed the economy’s resilience,” despite increasing whispers that a recession was coming.

The current economic expansion, which turns 11 years old in June, is the longest on record. To provide some perspective, average recoveries (post-World War II) last roughly six to seven years. Andrew D. Paparozzi, chief economist for Specialty Graphic Imaging Association (SGIA), Fairfax, Va., urged printers not to get too caught up in that detail, and doesn’t see a clear risk of recession in 2020.

“Economic expansions do not die of old age—that is, we are never due for a recession,” he explained. “Rather, recessions are caused by three factors: excesses, such as the real estate bubble prior to the Great Recession of 2008 to 2009, or the dot-com bubble prior to the recession of 2001; policy errors, such as excessively tight monetary policy, poorly designed, timed and executed tax increases and innovation stifling-regulation; and exogenous shocks, such as the OPEC oil embargoes of the 1970s.”

Of bigger concern to our industry are global headwinds from slowdowns in other countries, said Dr. Ronnie H. Davis, senior vice president and chief economist of Printing Industries of America (PIA), Warrendale, Pa.

“Germany’s economy, the world’s fourth largest, shrank in the second quarter,” he wrote in a PIA Flash Report titled “Economic and Print Market Scan for 2020.” “China’s industrial output is growing at the slowest pace in 17 years. The UK economy is staggering as it deals with the Brexit issue. The list goes on.”

For Davis, that list also includes traditional external shocks, like the geopolitical tensions in the Middle East and North Korea that could disrupt normal trade flows and the global economy; escalating trade frictions, which could be part of the first downward force, though it has become a separate force with the U.S./China trade war; rekindling inflation; Federal Reserve miscalculations; political and public policy errors; and longer-term slowing.

Still, the PIA economist believes the American print industry is doing well. Its total value of shipments increased by 3.61 percent to $174.1 billion, from 2017 to 2018, according to the Flash Report, which indicated printers’ profits were “generally healthy based on historic trends.”

“[The print industry] is vibrant, healthy and growing,” Davis said. “However, as always, it is very completive since there continues to be a large number of commercial printers.”

By SGIA’s estimates, total commercial printing industry sales (all sources, not just printing), for 2019 increased 1.7 percent to $87.3 billion, finishing in line with the association’s expectations, albeit at the lower half of the 1.5 percent to 2.5 percent range it had forecasted at the start of the year.

What, then, can we expect in 2020, an election year that leaves little doubt that few legislative accomplishments will occur between now and November?

“The election creates uncertainty,” Paparozzi admitted. “No one knows who’s going to win the presidency and, just as important, which party will control the Senate and which will control the House. The natural response to uncertainty is to wait for clarity, to hold off on major commitments. That’s a drag on the economy, and so the printing industry.”

The problem here is that the industry can’t isolate itself from the bigger concerns that hinder growth. By now, everyone has seen the dizzying headlines surrounding the coronavirus (COVID-19), with health officials reporting 10 deaths in Washington state and one in California at press time. Aside from the global concern for the loss of life and spread to other countries and continents, sourcing from China has been difficult for companies in the print and promotional products sectors, who are feeling the effects of the supply chain shutdown. Both economists said ongoing disruption lies ahead, at least in the short term.

Nevertheless, some promotional products suppliers are starting to see a bright spot. As of Feb. 25, Melissa Ralston, chief marketing officer for BIC Graphic, Clearwater, Fla., stated that all of its team members in China were doing well, and that most had returned to work. She added that, as factories reopen, some shipments were expected to depart China by the beginning of March, with more leaving in the following weeks as factories catch up with demand.

Dr. Tai Lin, president and CEO of Ariel Premium Supply, St. Louis, shared a similar forecast with Promo Marketing, the sister publication of Print+Promo, though he thinks shipments will be slightly behind the early-March projections.

“The earliest date that any factory will open the production line is the end of February,” he told Promo Marketing. “Some said the first week of March, depending on the areas. Communications with factories are OK so far [now] that some of their office workers can access emails. The earliest shipment out of China is around the end of April, according to the schedule above.’”

Paparozzi and Davis are monitoring the coronavirus’ impact closely.

There also continues to be a trickle effect from the replacement of print by other media. This might explain why Davis said that out of the four possible 2020 economic trajectories he proposed in the Flash Report—accelerated, modest, sluggish and recessionary—the most likely scenario is the one whereby the industry eventually will experience modest growth again in the vicinity of 2 percent.

In regard to print processes, Davis predicted a good year for inkjet (both wide format and production), wide format (particularly digital and inkjet) and digital toner-based.

Product categories to watch out for include wide format, packaging and personalized marketing campaigns. For those commercial printers who participated in the recent “SGIA Industry Survey: Markets and Products,” excitement is brewing over graphic and sign production.

“They are also enthusiastic about targeted direct mail, as part of personalized marketing campaigns, and the ‘wow power’ new printing and finishing technologies are bringing to many printed products,” he added.

That being said, Paparozzi acknowledged that barriers to growth are significant. Respondents in SGIA’s “Growth Strategies and Capital Investment Survey” identified obstacles ranging from an unforgiving business environment to internal challenges and understanding new technology. The most frequently cited obstacles were:

“The disruptions and uncertainty created by [ongoing trade and tariff] conflicts have slowed economic growth by dampening capital investment (e.g., hardware, software and structures),” Paparozzi observed. “Companies held off on planned investments, concerned that one of their products or key inputs would be next on the tariff hit list. The result: Capital investment declined 3.1 percent during the fourth quarter of 2019 after growing 4.3 percent a year earlier.”

So, how do printers protect their bottom line? Davis outlined a plan, encouraging them to keep the following messages in mind:

Human resources issues (e.g., lack of skilled personnel) are another effect of the tightening labor market, which Davis traces back to the 11-year recovery. But, there’s more to the story, and print’s age problem is a central plotline.

“For print, [HR issues] are even more of a challenge for two reasons: First, print is not viewed as a glamorous or growing industry by many (particular young) workers,” he said. “Secondly, print is composed of many smaller firms, and smaller firms may be somewhat at a disadvantage in recruiting and training new workers.”

The SGIA chief economist pointed to resources created by the Print and Graphics Scholarship Foundation, like “Graphic Communications as a Career,” and “Adventures in Print—Choose Your Career in Graphic Communications”—posters intended to generate interest among young people to pursue a path in print.

It’s not all bad news. Though respondents identified nearly 20 barriers to growth in SGIA’s previously mentioned “Growth Strategies and Capital Investment Survey,” how these companies were overcoming said barriers encouraged Paparozzi. Not only were they growing, they were growing profitably, he said. Each company has its own circumstances to address, but, generally, each believes its business is there to help clients  communicate more effectively with its clients—in print or otherwise.

“They identify and solve the client’s problem,” Paparozzi commented. “But, they also document their contributions to the client’s success, showing, for example, how much money and time they have saved them, how much they increased return to their marketing campaigns or traffic to their website, and how they will do even better next time.”

Some have even diversified their product offering beyond commercial printing. Of the survey participants:

That’s not to say all print service providers (PSPs) will blindly invest in print’s flavor of the month. If these product segments don’t fit their company’s vision, they’ll take a hard pass.

“Those who have diversified know exactly what they are getting into—what is and isn’t an opportunity, given their specific resources, capabilities and circumstances—and [they] don’t chase the next big thing,” Paparozzi said. “Put simply, they know there is a big difference between diversifying and diversifying profitab[ly].”

Looking ahead, the big winners in 2020 will not be companies of a particular size or ones that specialize in a particular niche; rather, they’re who will get their clients noticed, or as one SGIA participant put it: “If we help them get noticed, we help them get business—that is what they are really paying us for!”

While there is a place for thinking big, PSPs must remember to think carefully.

“In our industry, the gamut of opportunity is increasing, but the margin for error is shrinking,” Paparozzi said. “We can’t be so risk-averse that we miss opportunities. But, as mentioned, we can’t just follow the crowd into the next hot thing.”

Davis, too, feels this is an industry of opportunity. For those having trouble, he offered uplifting advice.

“I remain optimistic about print,” he concluded. “I have been saying this throughout my 32 years following the industry, and it has remained true even as many thought print would decline. The great upheaval in print as a result of the digital revolution is behind us, and print has truly integrated with other communication and information media.”

Like what you’ve read so far? Click here for the complete 2020 State of the Industry Report, including our complete in-depth analysis, along with key insights and strategies for growth from thought leaders in the printed forms, labels, promotional products and direct mail sectors.